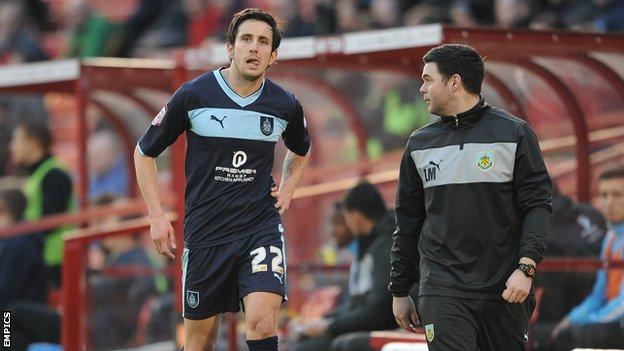 Brian Stock claims he was the victim of mistaken identity when he was sent off in Burnley's FA Cup defeat at Barnsley.

Stock was shown two yellow cards by referee Paul Tierney during the first half of the 1-0 loss at Oakwell.

"For the first yellow card, the referee has booked me by mistake," the midfielder told BBC Radio Lancashire.

"Fair play to [Barnsley] players like Marlon Harewood. He was trying to tell the referee that he was booking the wrong person."

The former Bournemouth and Doncaster man continued: "The referee didn't give me a reason as to what he booked me for. He just said 'I've seen it' and said it numerous times.

"I can't really complain about the second, but it's a really soft two yellow cards. I'm gutted to have been sent off and for us to be out of the FA Cup as well."

Jamaican winger Dane Richards played the final 21 minutes of the third-round tie after finally linking up with the Clarets from Vancouver Whitecaps.

Stock was impressed with the 29-year-old's cameo appearance, adding: "He's very quick so we want to get him on the ball and running at defenders.

"It doesn't matter what level you play at - pace is an asset. He's going to be a valuable asset to the squad."