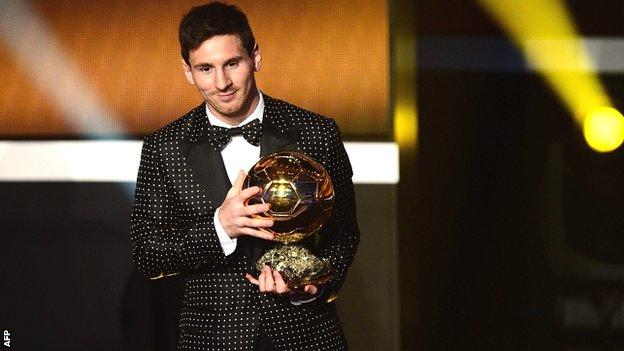 Barcelona and Argentina forward Lionel Messi has been awarded the Ballon d'Or for a fourth year running.

Despite his goals, the Catalan giants failed to win either the Spanish league title or Champions League last year.

Abby Wambach won the women's award and Vicente del Bosque the coach accolade, while the team of the year was made up only of players from Spain's La Liga.

"Ronaldo and Iniesta would be fitting and worthy winners in any era. This, however, is not any era - it is the Lionel Messi era."

Messi was announced as the winner of the Ballon d'Or, the award given to the world's best player, during a ceremony held in Zurich on Monday.

He was part of a three-man shortlist for the prize, which is voted for by journalists, and national coaches and captains, alongside midfielder Iniesta and forward Ronaldo.

"To tell you the truth this is really quite unbelievable," said the Argentine. "The fourth award that I have had is just too great for words.

"I would like to recognise my other colleagues from Barcelona. Andres, it has been great to train and play alongside you.

"I would also like to recognise all of my friends in the Argentina national team, everyone that has worked with me, coaches and staff and my family and my friends. Also my wife and my son. Thank you."

He netted 79 goals for Barcelona, plus another 12 for Argentina, in 69 games for club and country.

Fifa world team of the year

But Real Madrid clinched the Primera Division with a nine-point winning margin over their arch rivals, who were eliminated in the Champions League semi-finals by eventual winners Chelsea.

Messi also featured in the team of the year, which was made up of 10 players from Barca and Real Madrid plus Atletico Madrid striker Radamel Falcao.

USA forward Wambach was named women's world player of the year, the first American to win the award since Mia Hamm in 2002.

Del Bosque and Pia Sundhage collected the men's and women's coaching gongs for their work with Spain and USA respectively.

Real boss Jose Mourinho and Pep Guardiola, who left Barca in May to take a year's sabbatical from the game, finished behind Del Bosque.

At a news conference before the Ballon d'Or ceremony, Guardiola confirmed he plans to return to management next season

The Spaniard, 41, stepped down after winning 14 trophies in four years, including two Champions League crowns and three La Liga titles.

"I will return [next season] because I am young, but I have been living the kind of life that I wanted and one that my family also deserved," said Guardiola, who has relocated to New York with his wife and children.

The Puskas Award for goal of the year went to Fenerbahce's Slovakian striker Miroslav Stoch for his strike against Genclerbirligi in March.

Fifa world team of the year