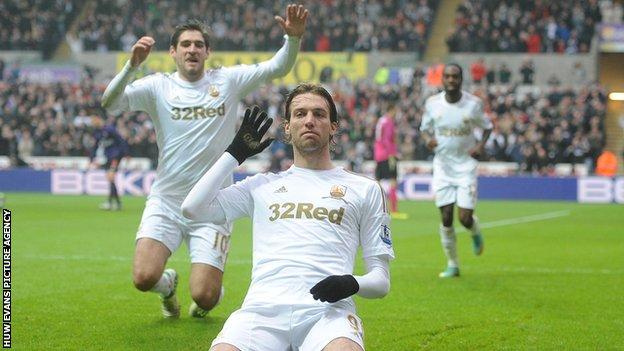 Swansea City will struggle to keep hold of striker Michu, according to Wales manager Chris Coleman.

Michu, a £2m summer signing from Rayo Vallecano, scored his 15th goal of the season on Sunday against Arsenal.

Coleman does not expect the 26-year-old Spaniard to move in January but feels Swansea will sell in the summer if the price is right.

"It won't be easy for them to keep hold of him," said Coleman, who saw Michu's scoring cameo against the Gunners.

"If any player at Swansea City is performing like Michu is then the big boys are going to look, and if they want you enough they will pay the money.

"As much as Swansea want to keep him, they won't be able to say no to that. They might say he is not for sale, but everyone is for sale at a price."

Michu scored his 15th goal in 24 appearances this season on Sunday, putting Swansea ahead against Arsenal in their third-round FA Cup tie at the Liberty Stadium.

The striker, under contract until 2015, had been on the pitch a mere 73 seconds as a second-half substitute when he lifted the ball over Gunners centre-back Per Mertesacker and slotted past goalkeeper Wojciech Szczesny.

However, Laudrup is adamant that his star player is settled in Swansea and is going nowhere in the immediate future even if a large bid is received for Michu.

"Goals are worth money and points are money, so obviously when you have a player who scores a lot of goals there will always be an interest from other parts," Laudrup said.

Atletico Madrid have already made their interest known and Coleman believes plenty of Premier League clubs will be contemplating bids.

"A lot of people will say he remains an unknown entity, but if he repeats what he is doing then that is when the danger will come," said Coleman.

"That is when one of the bigger teams will probably take a chance on him."