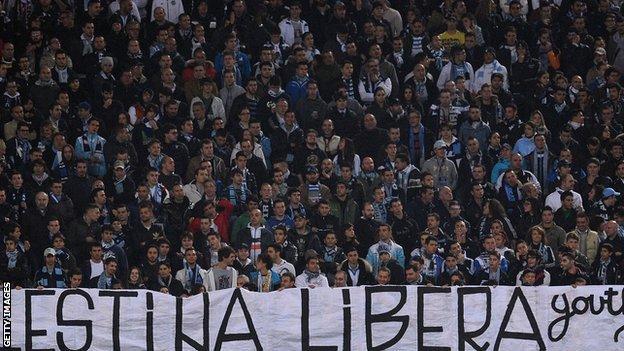 Italian club Lazio have been fined £120,000 by Uefa over the behaviour of their fans, including racist chanting, in Europa League games against Tottenham and Maribor.

The incidents involving Spurs occurred during the 0-0 draw between the two sides in Rome on 22 November.

Tottenham have been fined £8,570 for "crowd disturbances" during the same fixture.

Uefa say appeals can be lodged against the verdicts within three days.

After the November match, Spurs boss Andre Villas-Boas said Uefa "had to act" over chants from the crowd.

Spurs, the Football Association and Lazio all strongly condemned the fans, who allegedly chanted anti-Semitic songs during the game, 24 hours after a knife attack on Tottenham fans in the Italian capital.

A portion of the Lazio fine also relates to "racist conduct of their supporters, ignition of fireworks and incidents of a non-sporting nature" during the game against Maribor in Slovenia on 6 December.

Maribor have been fined £14,580 for "insufficient match organisation" and the throwing of missiles or fireworks by their supporters at the same game.