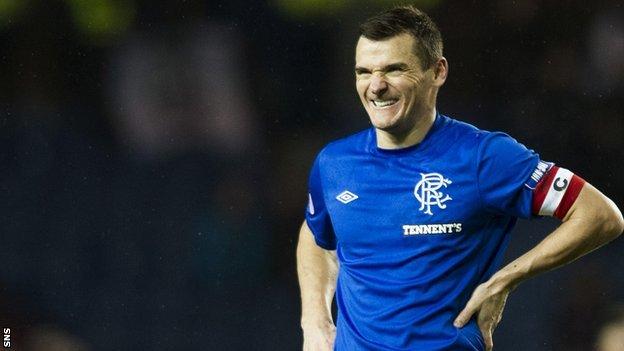 Rangers captain Lee McCulloch is mulling over a period on the sidelines to recover from ankle injury.

McCulloch picked up the knock in December's victory over Queen's Park, forcing him out of this month's victory at Annan.

And, despite returning for the 1-1 draw with Elgin on Saturday, the 34-year-old fears further rest may be required.

"It's just something I'll need to have a look at and I know I need to do what is best for the team," he said.

"I was struggling at the Queen's Park game at Hampden with my ankle," the former Scotland cap told the club's official website.

"It was really sore and I was trying to protect it as much as I could.

"I then missed the midweek game at Annan and in the game on Saturday I could feel it a little bit when I was running.

"If I'm not giving the side anything because of my ankle, it's up to me to suggest taking me out and we'll see how things go this week."

The Ibrox side have also confirmed that defender Ross Perry will have to see a specialist after suffering a broken nose against Elgin.

And Australian goalkeeper Mathew Ryan has been forced to postpone a trial with Rangers after picking up a shoulder injury.

The Central Coast Mariners player sustained the problem in their match with Western Sydney Wanderers.

And the A-League club's website stated: "Both clubs have agreed that it is in Ryan's best interests to remain in Australia under the care of the Mariners' medical department for the foreseeable future."