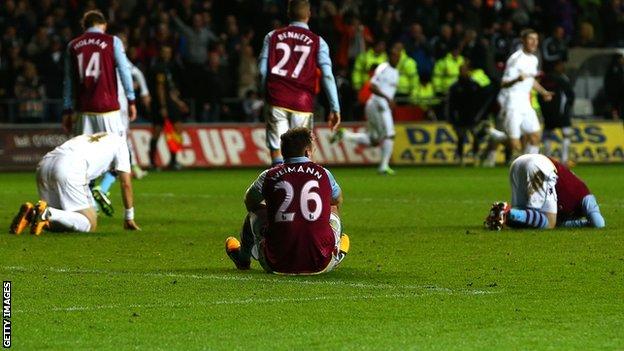 Bradford City boss Phil Parkinson believes his side need to exploit the "vulnerability" that Aston Villa have shown in recent Premier League games.

They host Villa in the first leg of their League Cup semi-final on Tuesday.

Paul Lambert's side, who beat Ipswich 2-1 in the FA Cup on Saturday, have conceded 17 goals in their last four league matches.

"We have to take advantage of the fact they've conceded a lot of goals," Parkinson told BBC Radio Leeds.

"It doesn't matter what level you play at, if you concede that number of goals then there is a vulnerability there, confidence-wise.

"They'll look at Saturday's win as a big bonus but prior to that they had let in a lot."

Parkinson led his side to a famous penalty shoot-out victory over Arsenal in the quarter-final.

He says the club will be approaching the games against the top-flight strugglers with the same mentality as that tie.

"It will be exactly the same, it is a bonus for us to be playing these games," he added.

This is the first meeting between the two sides since Villa's 3-0 win at Bradford in the Premier League on 3 February 2001. Darius Vassell scored twice and Julian Joachim once to give John Gregory's side a comfortable victory.

"We didn't expect to win against Arsenal but we did and now we get two more games against a Premier League side.

"I think it's great for our young players because it is an experience that will never leave them and will benefit them and us hugely."

The Bantams will be looking to improve on their disappointing 2-0 defeat at struggling Barnet on Saturday that saw them drop out of the League Two play-off places on goal difference.