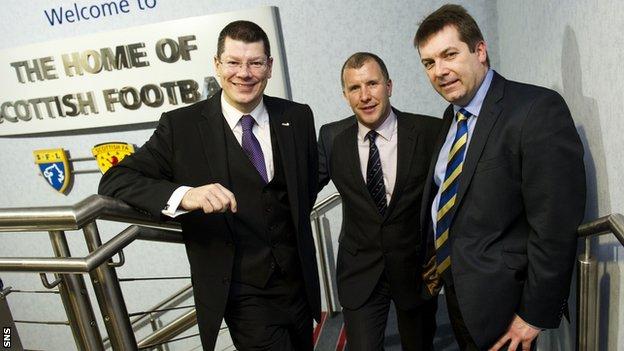 Scottish clubs will hold a vote on a possible new league structure before the end of January.

Scottish Premier League clubs have proposed a 12-12-18 set-up and Scottish Football League clubs will now put that idea to a ballot.

In November, the SFL came up with a 16-10-16 blueprint for reconstruction.

But Scottish FA chief executive Stewart Regan confirmed an agreement on the principles of restructuring, including a merger of both bodies.

No deadline has been set for the implementation of the proposed changes but it remains possible they could be in place as early as next season.

Representatives of seven SPL clubs and eight SFL clubs met with administrators from the governing bodies at Hampden.

And following the gathering it was announced that SFL teams will be asked to vote on the implementation of a Premier League of 12 teams, a Championship of 12 teams and a National League of 18.

The top two divisions would split after two rounds of fixtures in which teams had met home and away.

The top eight clubs would then meet a further twice home and away, while the bottom four clubs would play against the top four from the Championship.

These eight clubs would have their points re-set to zero then meet twice, home and away, with the bottom four clubs being relegated at the end of the season.

SPL clubs will also have a formal vote, having unanimously agreed to explore the advantages of the 12-12-18 set-up.

The current system has three divisions of 10 below the 12-team SPL.

The SPL needs an 11-1 majority to push through the plans, while the SFL needs a minimum 75% agreement.

"We have had a very productive meeting of the Scottish FA's professional game board at which we had board representatives from around a third of the 42 senior clubs in Scotland," said Regan.

"I'm delighted to say that we have agreed a set of principles to restructure Scottish football.

"That will include a single league body, subject to club consultation.

"Ultimately it will be the clubs that decide but we have seen a willingness to make change happen and a recognition that Scottish football is crying out for a new dawn and we have now got agreement to take to clubs for a single league body.

"That is a huge step for the game in Scotland and it shouldn't be underestimated.

"The clubs will decide what can be delivered by the start of the coming season, but that's not something we are going to get hung up on.

"We will deliver the change, as a collective, when we believe it's the right time for the game."

Two months after receiving unanimous backing for a 16-10-16 plan, SFL chief executive David Longmuir now hopes to convince more than 22 of his 30 member clubs to back the SPL proposal.

"The governance of the game and distribution of wealth will now affect all 42 clubs, and I think that in itself is a major breakthrough," he said.

"Every club should be able to embrace this because they are all going to benefit from it.

"Hopefully we can get the fans and let them engage with the process as well because what we are doing in the foundations of the game - distribution, governance, play-offs, more meaningful games, a pyramid - those are the key things."