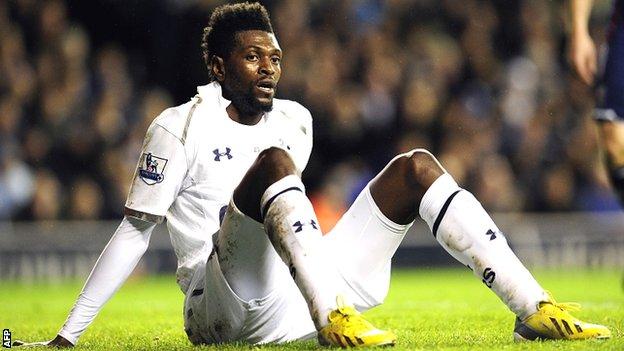 Togo have selected Emmanuel Adebayor for the Africa Cup of Nations after the Tottenham striker reversed his decision not to play in the tournament.

The 28-year-old Togo captain will join the squad after Tottenham's Premier League match against QPR on Saturday.

Adebayor initially because of a row over team security and unpaid bonuses.

But the striker will travel to South Africa after talks with the country's president Faure Gnassingbe.

"It is to do something extraordinary and I know that the fans know what I am capable of doing," said Adebayor.

His absence for the tournament, which starts on 19 January, will leave Tottenham with Jermain Defoe as their only recognised striker.

After QPR, Tottenham host Manchester United on 20 January before travelling to Leeds or Birmingham in the fourth round of the FA Cup on 26 January.

Away games against Norwich and West Brom precede the visit of Newcastle on 9 February, with the Cup of Nations ending the following day.

Adebayor has scored only three goals in 17 appearances this season and in his absence, the goalscoring burden will rest largely with Defoe, who has struck 14 times in 28 games this term.