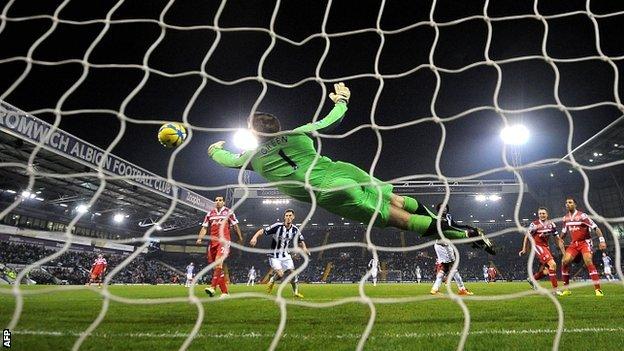 Bothroyd tested Boaz Myhill in the first half when he cut in from the right and hit a shot from 18 yards.

But that stop was bettered by QPR keeper Rob Green a minute later, when he clawed Romelu Lukaku's header away.

Green made several second-half saves and Bothroyd pinched victory when he beat Myhill with a tame header.

It was Bothroyd's first goal for QPR this season, having spent parts of the season on loan at Sheffield Wednesday.

One-time England cap Bothroyd netted his first goal for QPR since scoring the opener in a 3-2 home defeat by Manchester City on 5 November 2011.

But it was Green, who built the foundations of the victory, with match-winning stops either side of half-time.

It means Harry Redknapp's side are unbeaten in 2013 despite being rooted to the bottom of the Premier League, and the win was their first against Premier League opposition in this competition for 18 years.

QPR's improvement has been in contrast to West Brom's slump in fortunes and the Baggies have now won only two of their last 11 matches in all competitions.

The hosts were more threatening early on with Green acrobatically denying Lukaku after 29 minutes before stopping Jerome Thomas's cutback.

Shaun Wright-Phillips replaced Djibril Cisse at half-time and there was more thrust to the visitors play as a result, with Myhill forced to stop a deflected effort from the substitute.

Bothroyd then scored with 15 minutes left when Myhill failed to hang on to the striker's header following Alejandro Faurlin's corner.

Green had to save twice again from Markus Rosenberg and then capped a fine performance to thwart Graham Dorrans.

"I was disappointed, I thought we had the better chances and Rob Green made some good saves but we went to sleep at a set play.

"The squad's been stretched in recent weeks, the boys have done their best. Maybe the luck we had a few weeks ago has deserted us.

"But as a group, we know what we are trying to do. There's no better team to try and turn it around than against Aston Villa at the weekend.

"We played some decent stuff without having a spark. It could not have been a great spectacle but we were the team trying to win it."

"Jay Bothroyd did well tonight. He was written off. He's been at Sheffield Wednesday and not done very well.

"They sent him back and I thought I'd give him a go tonight and see what he could do. He did well but then again, he played for England a couple of years ago under Fabio Capello.

"It was a tough match. The first half was a bit dour, not a lot happening but Rob Green made a fantastic save in the first half (from Romelu Lukaku's header).

"Then when he came under pressure in the second half, he made another couple of good saves after we scored."