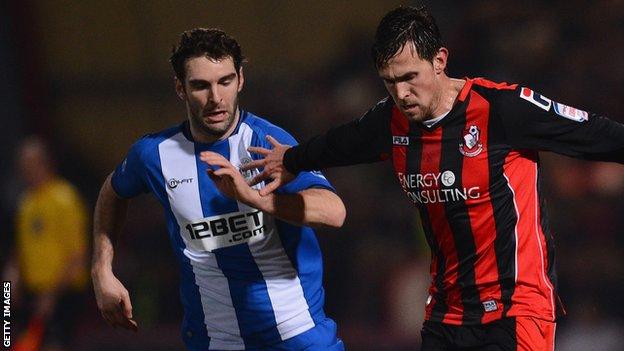 Wigan sealed a place in the fourth round of the FA Cup with Mauro Boselli's first-half strike ending Bournemouth's 18-match unbeaten run.

Boselli found the top corner of the net after Harry Arter lost the ball.

The League One club went close to an equaliser, with Eunan O'Kane and later Marc Pugh hitting the crossbar.

Bournemouth headed into Tuesday's replay full of confidence following a club-record-equalling 18-match unbeaten run that coincided with Eddie Howe's return to the club as manager.

Cherries made the brighter start without creating any clear chances but it was a mistake from the hosts that led to Boselli's opener.

It came when Arter gave the ball away to Boselli in midfield who himself unleashed a fierce shot from 20 yards into the top corner of the net to silence the home fans.

It was Wigan who again went close, this time Callum McManaman with a neat turn and low shot that Jalal did well to get down to.

The Cherries were then forced into an early change with Pugh replacing the injured Lewis Grabban and the winger immediately created an opportunity for Wes Thomas who under pressure headed wide from an in-swinging cross.

O'Kane then rattled the angle from the edge of the area after being played in by Thomas when Wigan were caught in possession deep in their own half.

After the break Thomas continued to be Bournemouth's most dangerous outlet and the Cherries striker headed straight at substitute keeper Ali Al Habsi from close range.

Josh McQuoid then came desperately close to turning in a long throw from Steve Cook with the Bournemouth man a foot short from prodding home the equaliser.

At the other end Jalal denied Pablo Henriquez as the game finally started to open up.

Arter was next to warm the palms of Al Habsi with his tipping 20 yards shot unconvincingly tipped over the bar.

As Bournemouth pressed, Wigan looked dangerous on the break and Jalal was forced into a fine low save from Boselli with Henriquez's follow-up superbly blocked by Tommy Elphick.

The Cherries pushed hard for an equaliser, roared on by vociferous home support, and the south-coast side went desperately close through Pugh who saw his shot from the edge of the area rebound off the crossbar.

Late on Nouha Dicko fired wide at the back post for the Latics when unmarked, while Matt Tubbs forced a fine sprawling save from Al Habsi.

But Tubbs' free kick in injury time was the last action of the tie as Wigan held on to seal a trip to the Moss Rose in the next round.

Bournemouth manager Eddie Howe: "I thought it was a really good game and Wigan showed us a lot of respect with the team they picked. It was a strong team and we were slightly disappointed with our first-half performance.

"I think in the second half that all changed and we had a right go at Wigan and threw everything at them and, apart from their goalkeeper making some good saves and the woodwork, I think we would have deservedly forced extra-time. I think it was a really good effort from the players, we did not necessarily lose it and I think Wigan won it - if a team was going to beat us they were going to have to earn it.

"On another day we would have got away with that mistake [Arter's pass in the build-up to Boselli's goal] but we didn't and we got punished. Fair play to the lads though because we stayed in the game when it would have been easy to go chasing the game too early."

Wigan manager Roberto Martinez: "It was a very difficult game as we expected. We know that Bournemouth have been unbeaten and it doesn't matter at what level you do that at because you have got a very strong unit.

"I must admit Bournemouth deserve huge, huge credit over the two games in the manner they play football and I think it is going to bring real success to this football club. We knew that we had nothing to win today and had to be very professional; really, really strong and I couldn't be more proud of my players.

"I'm very proud with the coaching staff and everyone involved because to make nine changes and to be able to be a team and perform in the manner we did today in a professional way should make everyone extremely proud."