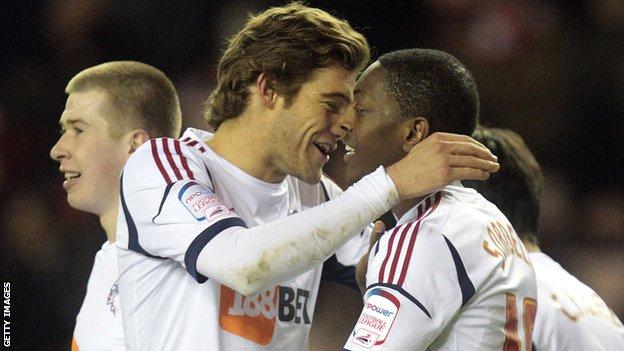 Two goals from Bolton striker Marvin Sordell set up a fourth-round tie with Everton and knocked Sunderland out of the FA Cup.

The home side dominated the first half but failed to make it count with Adam Johnson going closest.

Sordell's first of the night came from the penalty spot after Darren Pratley was bought down by Jack Colback.

He doubled the advantage and scored his fourth of the season firing home from close-range.

There was another boost for the visitors when United States international Stuart Holden came on to make his first appearance since September 2011, after recovering from a serious knee injury.

Since going out in the third-round to Sunderland in 2009, Bolton reached the last 16 of the FA Cup in 2010, the last four in 2011 and the quarter-finals last season.

Bolton, who led 2-0 in the first match before being pegged back, opted to make six changes from the side that drew with Millwall at the weekend, while Martin O'Neill named his strongest side as he looked to progress in the competition.

It was the home side who started the brighter and Johnson was the pick of the players but he was twice denied by Andy Lonergan in the Bolton goal.

The visitors withstood the pressure, which saw Titus Bramble and Connor Wickham also go close before the interval, and opened the scoring with their first decent chance.

Pratley combined well with Chris Eagles before bursting into the box, only to be bought down.

Sordell, who has found goals hard to come by this season, made no mistake from the spot, beating Sunderland keeper Simon Mignolet.

The second goal came 10 minutes later when Eagles threaded his pass to Tyrone Mears, who squared for Sordell to force his second under Mignolet, from close range.

Sebastian Larsson, on as a second-half substitute, went close with a late free-kick for the Black Cats but Bolton held on and will welcome Everton to the Reebok Stadium in 12 days time.

Sunderland Martin O'Neill: "It was really disappointing, following Saturday's excellent display, and we need to start getting some consistency to our game.

"We're going to have to get it. This is a big club and we shouldn't be spending 40 years without winning something, we really shouldn't.

"I know some people field weakened sides but we didn't, we tried to win tonight and we weren't able to do it and that was very disappointing."

Bolton manager Dougie Freedman: "We had a game plan tonight and I felt we stuck to it. I think we defended very well and made sure in the first 60 minutes we limited Sunderland to a few opportunities.

"We're looking forward to it (Everton). We feel right now that we can perform against anyone, and if we defend like we did tonight and keep our discipline, we have definitely got every chance."