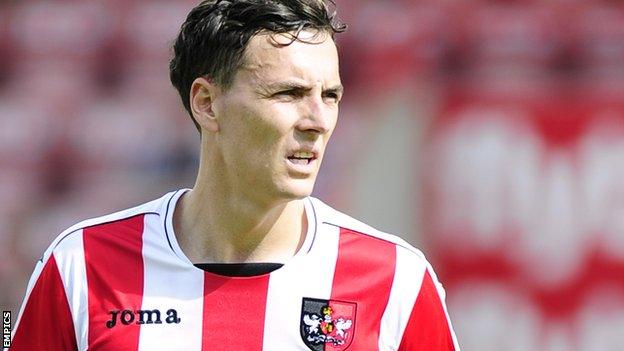 The hosts took an early lead through Rene Howe's powerful spot-kick after a handball by defender Scott Bennett.

The Grecians came back strongly in the second half, with Jimmy Keohane's audacious flick forcing a fine save from Gulls goalkeeper Michael Poke.

And Exeter got the goal their pressure merited as Gow stepped up to score from the spot after he was fouled.

It was the home side who had the better of the opening stages, with Ryan Jarvis and Lee Mansell both having early attempts on goal.

And the Gulls deservedly went ahead thanks to Howe's confidently dispatched penalty, after Bennett was adjudged to have handled in the area.

In an open first half, Steve Tully and Keohane both fired shots just wide as the Grecians looked to respond.

The chances continued to flow after the break and visiting goalkeeper Artur Krysiak had to be alert to tip over Howe's volley.

And, after Keohane and Gow both missed further chances for the away side, the equaliser duly came through the latter's penalty with six minutes remaining.

The result means Torquay are now without a win in six matches, while Exeter's run of five consecutive away victories comes to an end.