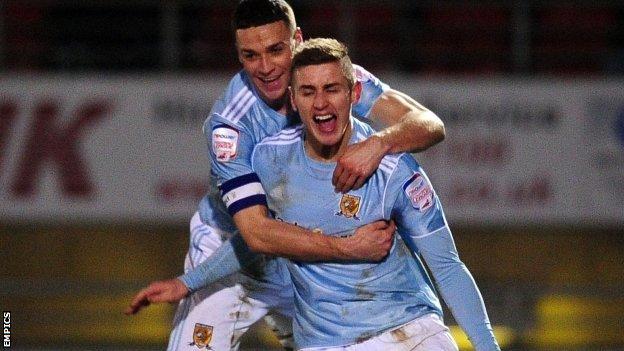 Hull will face Barnsley in the FA Cup fourth round thanks to Tom Cairney's strike in extra-time sealing a win over Leyton Orient.

Striker Nick Proschwitz scored the opener for Hull when he controlled Liam Rosenior's cross and volleyed in.

With less than five minutes remaining, Dean Cox swung in a cross which looped over keeper Eldin Jakupovic and into the net to give Orient a lifeline.

But late on in extra-time, Cairney fired in low from the edge of the area.

Orient could only clear Proschwitz's cross to the midfielder, who drilled in past keeper Jamie Jones to grab the winner.

Victory for the Tigers, second in the Championship, was their 100th in the FA Cup.

Earlier Orient, 15th in League One, twice had efforts disallowed for offside.

First, Dave Mooney was flagged when he tapped in after Cox's shot rebounded off the post, and then Lee Cook was deemed to have strayed offside after he had slid the ball in.

Hull reached the semi-finals of the FA Cup in 1930 where they were beaten by Arsenal 1-0 in a replay after the first match ended 2-2.

Hull's Jay Simpson twice wasted good chances, with an effort that was too close to Jones, and another which he scuffed wide.

The side will now meet fellow Championship side Barnsley at home in the fourth round.

Hull manager Steve Bruce: "All credit to Orient, they have given us two really difficult games and if we're honest we could be out of the cup. But we're not.

"You hope a little bit of quality comes through in the end but fair play to Orient, they took us to two really hard cup ties and on another day could have gone through."

Leyton Orient boss Russell Slade: "We've done more than enough over the two games to get a result so that just frustrates me even more [the decision to disallow Lee Cook's goal].

"You want the officials to get it right on the night. You can't have that, it's a massive game for this football club and someone is not doing their job."