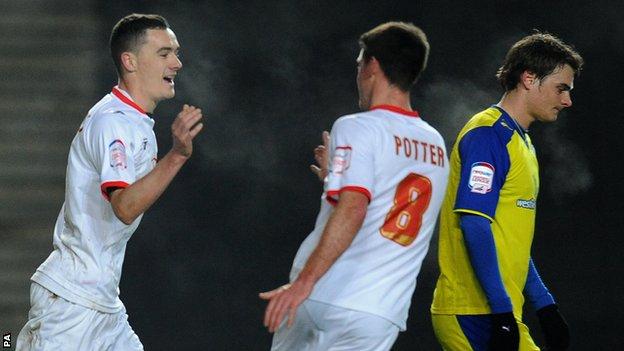 MK Dons reached the fourth round of the FA Cup for the first time as Shaun Williams and Dean Bowditch struck in the replay against Sheffield Wednesday.

Williams opened the scoring with a penalty after Lewis Buxton was penalised for pulling Bowditch's shirt.

Bowditch's free-kick was then embarrassingly allowed to bounce in by Wednesday keeper Stephen Bywater.

The result came amid speculation that MK Dons boss Karl Robinson had been approached to take over at Blackpool.

On 5 January, the two sides had played out a 0-0 draw and there was little to separate them in the early stages before referee Lee Collins pointed to the spot just before the half hour mark.

The official then angered the home support at Stadium MK after he failed to award a penalty after Daniel Powell seemed to have been clipped in the box while he attempted to flick in Ryan Lowe's throughball.

Championship strugglers Wednesday had not scored in their three previous games before Saturday's surprise 3-1 win against promotion hopefuls Hull, and their much-changed side only threatened sporadically from distance through substitute Danny Mayor and Irishman Paul Corry.

MK Dons's performance made light of their League One status, and after Bywater watched Bowditch's harmless-looking delivery go past him, they should have scored a third when Williams found the unmarked Lowe 10 yards from goal but the striker mishit his effort.

The reward for Robinson's men is a game against the Premier League's bottom placed club Queens Park Rangers after they beat West Bromwich Albion.

"It's brilliant tonight, you know how much the FA Cup means to me and that's why I'm looking forward to the next round now.

"I'm over the moon with all the players - I'm ecstatic because we've just beaten Sheffield Wednesday and we've never done that either.

"I can't wait to go to Loftus Road, it's a proper football ground and the fans there are very vocal."

"The referee had a shocker. He allowed Smithy (Alan Smith) to run the game. At the end of the day he might as well have given the whistle to Alan, because he ran the game.

"He's booked people but all credit to Smithy because that's what a senior player will do if he's allowed to do it.

"I just thought it was too big a game for him. He lost it somewhere along the line and that can happen, so he's had a bad day at the office."