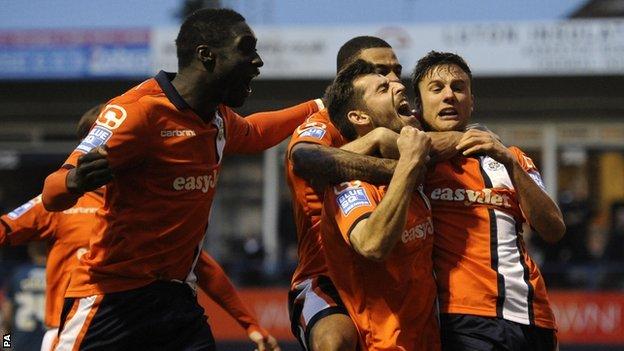 Luton Town's chief executive has said promotion to League Two is so important he would have swapped their FA Cup win over Wolves for three points at Woking.

The Hatters upset the Championship side to earn a fourth-round tie at Norwich City, but lost 3-1 to Woking last week.

"The league is by far the most important thing for us to focus on this season," Gary Sweet told BBC Look East.

"Arguably, we would probably have even swapped the Woking loss and three points for a loss against Wolves."

Luton, a top-flight side 21 years ago, are now in their fourth season out of the Football League, having fallen short in three consecutive Blue Square Bet Premier play-off campaigns.

Their FA Cup run, which will take them to Carrow Road at the end of the month, could be worth up to £250,000, but is far less of a priority at Kenilworth Road than returning to the Football League.

"Beating Wolves shows we're good enough and it's our short-term goal to get out of the league. We want to do that and it's our priority this year," said Sweet, who was part of a consortium that lifted the Hatters out of administration in 2008.

"We wanted a Premier League club away and we've got it. It's not too far away for our supporters, which is fantastic.

"The money from these games certainly helps to go back into Paul Buckle's budget to reinvigorate the side so we have a better chance of getting out of the league this season.

"The Wolves game probably brought in about £120,000, which was very welcome. The Norwich game could give us a little bit less with the ticket prices that have been proposed, but again it's very welcome. So we could be talking about £250,000 or so."

Luton follow up their win over Wolves with the visits of Barrow in the league and Skelmersdale United in the FA Trophy.