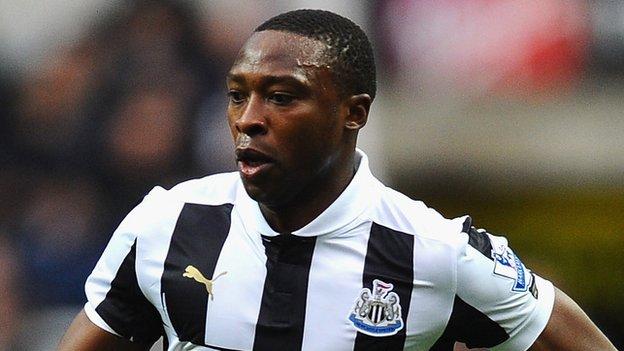 The Nigeria Football Federation (NFF) has said no action will be taken against Shola Ameobi and Danny Shittu for opting out of the African Cup of Nations.

The England-based pair were named in an initial 32-man squad.

But Newcastle's Ameobi refused to honour the call-up and Millwall's Shittu requested to be excused.

The NFF had initially said it would seek Fifa sanctions on both clubs if they did not release the players.

There are players in the squad who can deliver for Nigeria, so we can only wish Ameobi and Shittu all the best in England

"We have decided to focus our energy on the players and officials going to the Nations Cup in South Africa," NFF board member Chris Green told BBC Sport.

"There's no point creating unnecessary distraction or pushing for sanctions when we have capable players in the Super Eagles.

"We have the rules firmly on our side to seek punishment but that will not make any positive contribution to our preparations.

"There are players in the squad who can deliver for Nigeria, so we can only wish Ameobi and Shittu all the best in England."

Had Nigeria pursued their complaint, both clubs would have been deprived of their players for the duration of the Nations Cup plus an additional five days.

Meanwhile, Nigeria coach Stephen Keshi was expected to announce his final 23-man squad on Tuesday, a day before the final deadline for submitting players for the tournament, which kicks off on 19 January.

But the process has been postponed until Wednesday, according to Chris Green.

"The NFF will take a close look at the list and ensure that everything is done accordingly," said Green.

"The coach has the final say on who's going and who's not, but administratively we must ensure technical areas are covered in the interest of the country.

"It's not an interference rather a strong effort to ensure the coach gets what he wants and the team travelling is in order."