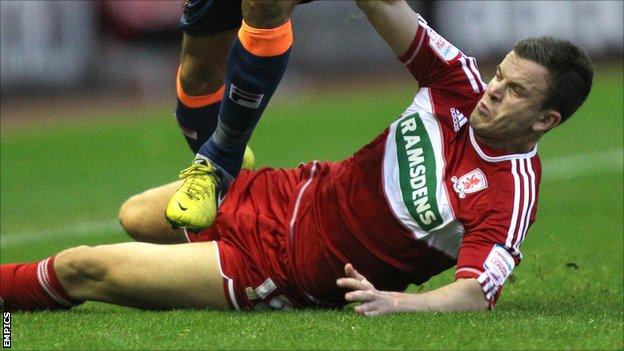 Middlesbrough's Andy Halliday is in no hurry to sign a new deal at the Riverside, even though his current contract expires this summer.

The 21-year-old joined Boro as a winger from Livingston in August 2010 but the majority of his 12 outings this season have come in defensive positions.

"It's the happiest I've been since I've been playing," Halliday told BBC Tees.

"Contracts take a long time to sort out, but I'm in no rush and it's certainly nothing to worry about."

I've got to give credit to the coaching staff, they've seen my attributes and the defensive instincts I bring because I don't want to lose

Halliday's emergence as a defensive talent within the Boro squad was the result of a shortage of cover in wide positions, with Justin Hoyte and George Friend spending time in the treatment room this term.

The Scot featured at centre-back in a back three against Hastings in the FA Cup last weekend and scored his second Boro goal in a 4-1 win - but later needed an operation on a broken nose in an eventful day.

"I've got to give credit to the coaching staff, they've seen my attributes and the defensive instincts I bring because I don't want to lose," he said.

"If playing at the back helps the team, then it's certainly something I'll do.

"It's been the missing part of the jigsaw for me as I've not had enough appearances over the last few years."