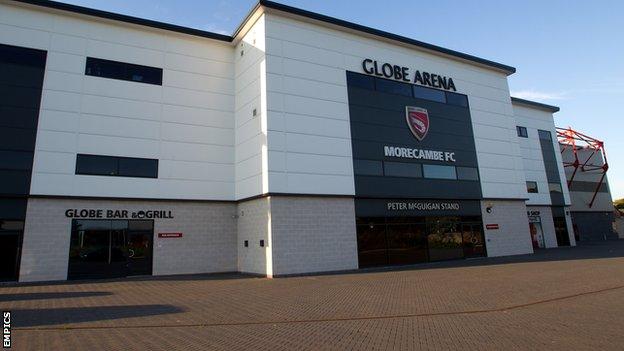 Morecambe chairman Peter McGuigan said the decision to allow fans free entry for the game against Dagenham & Redbridge proved to be a good one.

The game was watched by 4,029 fans, the Shrimps' record for a league match at the Globe Arena, as they won 2-1.

McGuigan told BBC Radio Lancashire: "It was great to see so many people come to the game and see such a great game.

"We didn't really know what sort of response we would get but to see so many was really heartening."

The Globe Arena, which opened in 2010 and resulted in the Shrimps leaving Christie Park, has a capacity of around 6,400.

Morecambe's largest home attendance of the 2012-13 campaign came on New Year's Day, when 3,635 watched their

Their average League Two crowd before Tuesday was 1,961 - with only Dagenham and Accrington attracting less supporters to home matches in the fourth tier.

Manager Jim Bentley had previously admitting a lack of funds have left him to his squad during the January transfer window.

McGuigan continued: "I was particularly pleased that so many children came to the game and I just hope that a lot of people come back again.

"We will certainly look to keep the momentum going from the response we had and put on other attractive offers although it certainly won't be as good as this one."

Morecambe came from behind at half-time to beat the Daggers for their first win in seven games.

"In the past when we have had big games we have sometimes not played well and people have gone away a bit disgruntled but that was certainly not the case in this game," McGuigan said. "The lads played some great stuff and it was exciting all the way to the end and to get the win after going behind was fantastic.