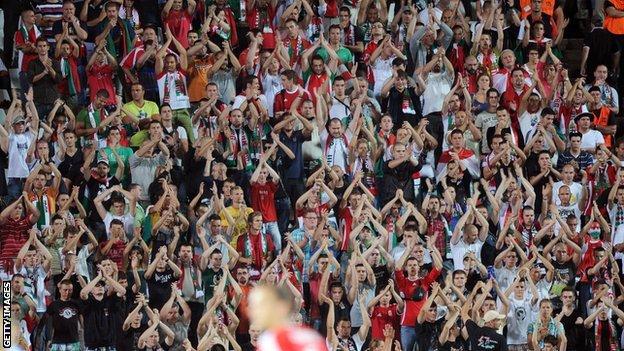 Fifa has ordered Hungary and Bulgaria to play their next 2014 World Cup qualifiers behind closed doors after racist incidents involving their fans.

Hungary supporters were reported for making anti-Semetic chants during their friendly against Israel in August.

Bulgaria were also sanctioned following racist remarks directed at a Denmark player during their World Cup qualifier in October.

A Fifa statement said: "We strongly condemn all forms of racism in football, and any form of discrimination will not be tolerated and will receive a strong response by the relevant authorities.

"The members of the Fifa disciplinary committee were unanimous in condemning an abhorrent episode of racism, anti-Semitism, and of political provocative and aggressive nature perpetrated by supporters of the Hungarian national team."

The two countries are currently in second place in their respective World Cup qualifying groups, which would be enough to earn a place in the European play-offs in November.

Fifa has also warned both nations that any repeat of the racist incidents could lead to them forfeiting a match, a points deduction or disqualification from a competition.