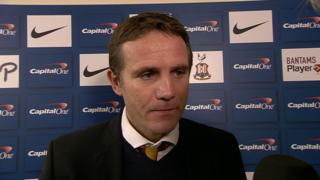 Phil Parkinson insists Aston Villa are still favourites despite his side's 3-1 win in the first leg of the League Cup semi-final.

The Bradford boss says his League Two side were "tremendous" against their Premier League opponents, but admits Villa's away goal is a "blow".

Parkinson adds that the reverse tie at Villa Park on Tuesday, 22 January will be "tough" but says his side will enjoy it regardless of the outcome.