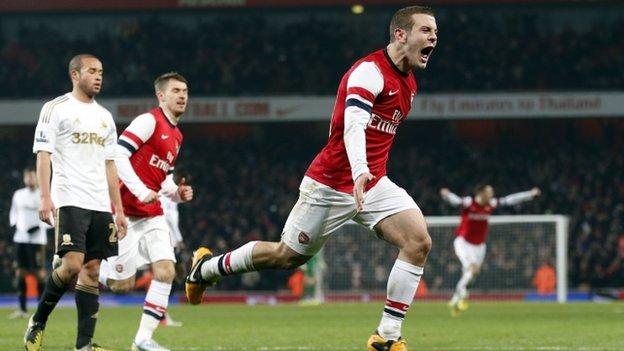 Jack Wilshere scored late against Swansea to send Arsenal through to an FA Cup fourth-round tie at Brighton.

The Gunners piled on the pressure during the final 20 minutes of the match and finally got their reward when the England midfielder fired in from the edge of the area.

Kyle Bartley went closest for the Swans when his header struck the bar.

His was one of four good opportunities created by Michael Laudrup's men in the opening 45 minutes as they dominated possession. The second half was a very different story as Arsenal finally got into their stride.

Wilshere was key to the Gunners improvement after the break, pushing higher up the field having had to support his fellow midfielders as they attempted to put the shackles on the sprightly Nathan Dyer in the first half.

The England midfielder could have scored another had Vorm not got down well to prevent his drive from going in. In fact the Dutch keeper was brilliant all night, blocking Vermaelen's shot before the break and then repeating the trick to keep out efforts from Giroud and Walcott.

Walcott also had a volley which struck the chest of striker Danny Graham, while Bacary Sagna's intended cross struck the Vorm's far post.

But with five minutes remaining, the last line of defence was breached when Giroud flicked Santi Cazorla's pass into the path of Wilshere, who rammed in his shot from the edge of the area - his first goal in the FA Cup.

It was the least the Gunners deserved, but few would have guessed they could produce such a performance after a tepid display in the first half.

The home side struggled like manager Arsene Wenger did with the zip of his coat, and were lucky not to go behind when Graham fired wide after he was put through by Kemy Agustien.

Bartley then hit the post with his header while Dyer, who faded in the second half, saw two efforts blocked by Vermaelen.

Laudrup brought on Michu midway through the second half, but the club's top scorer found himself helping out the defence on a night when Arsenal showed their bite.

The Gunners will now play Championship side Brighton, who have already disposed of one Premier League side, Newcastle.

"Jack was outstanding tonight. He played in a different position, a bit higher up and it suited him well. I didn't expect him to be this good at this stage.

"I always thought that if we could get Jack back to a reasonable level by January we will have done well, but he is ahead of what I could imagine.

"He is back to what he was before the injury, I think so, yes. A complete midfielder can defend and attack and Jack can also dribble and give a final ball so the closer players like him are to the goal the better it is for them."

"We tried, we defended well, at times heroic.

"They had two or three chances where you say 'It's only a matter of time when they score'.

"If they score a few minutes from the end you think it could have gone into extra-time, but they deserved the win in the end.

"I want to win every game and the players want to, but it's not possible for anyone. It's not a question of saying it doesn't matter and I am disappointed."