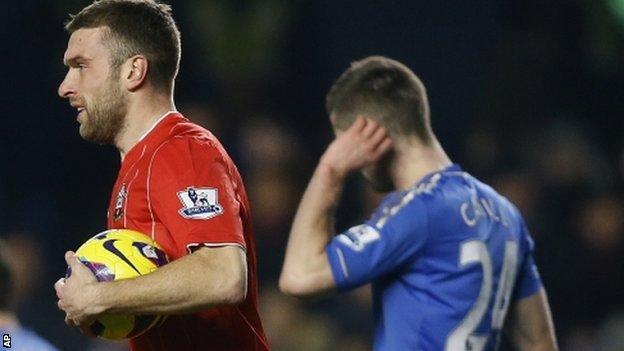 Chelsea's poor home record under Rafael Benitez continued as Southampton fought back from 2-0 down to snatch a point.

Demba Ba leapt to put the Blues ahead with a deflected shot and Eden Hazard added a second before the break, following up when Ramires hit the bar.

Chelsea have now won only one out of six domestic games at Stamford Bridge under Benitez and, for the third successive home game, boos rang out at the final whistle.

It was easy to understand the home fans' frustrations. This was a game that they seemingly had wrapped up at half-time despite missing several chances but they were rattled by Lambert's introduction and instant impact.

Ba could have made sure of the points when he volleyed over in the second half but sloppy defending gave Puncheon room for his explosive finish, which leaves Chelsea 13 points behind leaders Manchester United, with 16 games left.

Benitez at Chelsea: Home and away

Results in Premier League, FA Cup and Capital One Cup, not including World Club Championship or Champions League.

It was only the third time in 90 home matches in the Premier League era that Chelsea had surrendered a 2-0 half-time lead, a slip particularly ill-timed from Benitez's point of view considering the news about Pep Guardiola earlier in the day.

The announcement that the long-term Chelsea managerial target is to take charge of Bayern Munich next summer might have been bad news for Blues owner Roman Abramovich, but surely represents a window of opportunity for his interim boss.

If Benitez is to stay for longer than the end of this campaign, then results will arguably matter more than the opinion of the fans who have opposed his appointment from the start.

At the moment, both are going against him on home turf. Benitez has claimed this is down to the tactics of visiting teams rather than a reaction to the often abusive atmosphere but against Southampton it was poor finishing - and defending - that was to blame.

Chelsea were comfortable at the break, taking the lead through Ba's instinctive finish from Cesar Azpilicueta's cross and doubling it when Hazard impressively despatched a bouncing ball from the edge of the area after Ramires had struck the bar.

But the home side were given a rude awakening when Saints' top scorer Lambert, left on the bench while his side looked to defend deep and counter-attack before half-time, was summoned for a rescue mission.

It took Lambert, the leading English scorer in the top division, precisely two minutes and 47 seconds to announce his arrival in the game, powering home his header for his 10th goal of a productive campaign.

Chelsea could still have made the points safe, with Ba missing the target completely after he ran on to Juan Mata's superbly clipped pass, but it was Saints who had the last word as they extended their unbeaten league run to five games.

Shaw raided forward down the left flank and his cross was allowed to bounce across the edge of the area, where it was met by Puncheon to take a touch and fire a superb strike past the helpless Cech.

Chelsea interim manager Rafael Benitez: "We should have won.

"We didn't take our chances when we had them. We had situations where we could score. We didn't and they broke on a counter-attack. We gave them hope they could score and they did it.

"I was talking to the team at half-time, trying to say 'we have to score a third goal'.

"I think for us we cannot be happy drawing at home. I am disappointed.

Southampton manager Nigel Adkins: "We came with a game-plan to be compact and frustrate the opposition.

"It was a big call to leave Rickie Lambert out but we wanted to make sure we were in the game.

"At half-time it was 2-0 and I said, 'stick to the game-plan'. If we had gone and chased it there was every chance we could have ended up with a scoreline like Aston Villa, who conceded eight here.

"We stuck at it. Rickie came on and scored the goal and what a fantastic goal it was for the second one.