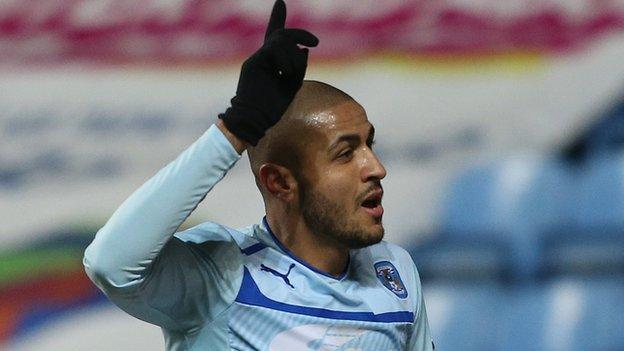 The big centre forward hooked in from six yards after Richard Wood had nodded Carl Baker's corner back across goal.

The win moves the Sky Blues up to 10th, just three points off the play-offs.

But Ronnie Moore's Rovers - who had won their previous four league matches - were left cursing a missed opportunity to go clear at the top.

Coventry were lucky to survive when, in the space of several seconds, Murphy made a double save from Ash Taylor's header and Liam Palmer's shot, either side of Jean-Louis Akpa Akpro's effort being cleared off the line.

But the home side had their fair share of chances too. Recalled Cyrus Christie had a left-foot first-half shot fumbled round the post by Owain Fon Williams, while Clarke headed disappointingly straight at the keeper.

Then, after the break, Franck Moussa shot just wide, while Gary McSheffrey was twice denied, first from close range, then from a curling free kick after Bakayogo's foul on Baker, who also had a free kick saved low down to the keeper's left.

Rovers finished strongly but, just a week from hitting his first goal for the club to earn the Sky Blues a dramatic, late Johnstone's Paint Trophy northern semi-final victory over Preston, Clarke was once again the matchwinner.

"They changed their shape for the first time this season, which was a compliment to us and the way we played first half warranted it.

"But, in the second half, they edged it. People have kept expected them to fall away but they showed why they are up there and Joe Murphy had to make a couple of saves.

"I'm pleased for Leon Clarke as he's missed one or two over the last couple of games, but if he keeps getting himself into those positions, he'll score more than he missed."

"Over the last 25 minutes of the second half we showed what we're all about and I think we deserved something.

"But you don't always get what you deserve. They were hanging on at the end and, if we'd scored one, we'd have gone out and won it.

"Bakayogo's had a free header from four yards should be in the back of the net. He knows he should have buried it. And that big scramble was like ping pong."