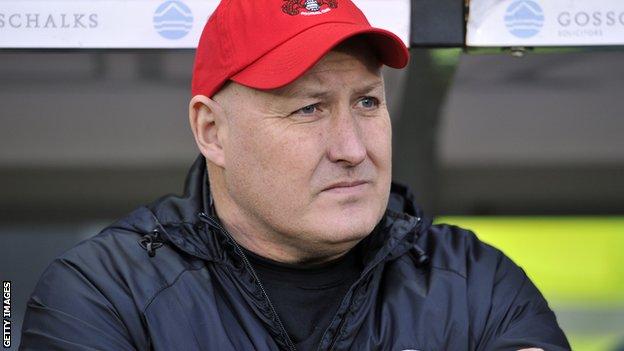 Leyton Orient boss Russell Slade says his squad is being stretched by their success in cup competitions.

The O's have played eight cup ties already this season and have a FA Cup third round replay and a two-leg Johnstone's Paint Trophy final to come.

Slade told BBC London: "With all the games and the small squad we've got it might be time to have a word with the chairman and see what he can get me.

"Maybe we can wheel and deal. Who knows what we can have for Saturday."

We've dug in and we're still in two cup competitions. As a club, a fan base, a manager and a chairman, we've got to be really happy with that

The O's face Hull City at Brisbane Road next week in their FA Cup replay and set up a Southern area final tie against Southend in the JPT after beating Yeovil 1-0 on Tuesday.

"We're one cup contest and two games away from playing at Wembley," Slade added.

"It's great to get into the Southern final.

"We've dug in and we're still in two cup competitions.

"As a club, a fan base, a manager and a chairman, we've got to be really happy with that."

Orient had Anthony Griffith sent off 14 minutes from time against Yeovil but won the match in the 90th minute when David Mooney headed home his 10th goal in 12 games.

But Slade suffered a blow as striker Kevin Lisbie was withdrawn in the second half because of a hamstring problem.

"It was a hard game," Slade added.

"They are a very direct side and play with a tempo you have to match.

"It wasn't a great spectacle but we ground them down and were trying to get on the ball a lot more in the second half.

"I didn't think they threatened us apart maybe from a set-piece because they have some big lads.

"Jamie Jones probably only had to make two saves."