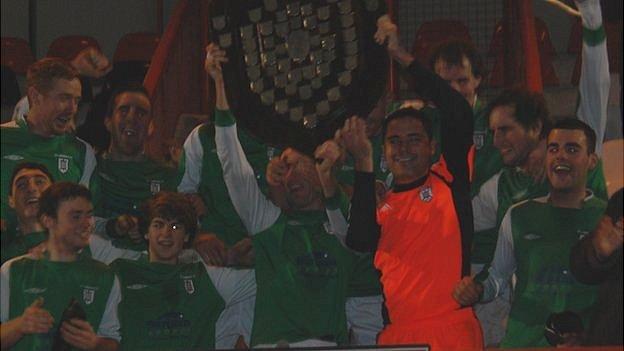 St Lawrence have won Jersey's Trinity Shield with a 5-2 victory over St Clement in the final.

Luke Watson's penalty reduced it to 3-2 at the break but goals from Ross Crick and Rupert Murray sealed the win.

It was the second time in three seasons that St Lawrence have won the inter-parish tournament and they took control of the final early on when Da Luca nodded in the opener from a corner after 12 minutes.

Helleur's well-taken goal just three minutes later left St Clement with an uphill task but they would not lie down.

Thompson's long-range effort deflected past wrong-footed keeper Jason Watts to keep them in touch but then on the half-hour slotted in to make it 3-1.

St Clement battled on and Jersey skipper Watson pulled one back from the spot after Tommy Wigley's late challenge on Keiran Lester in the box.

Soon after the break, a mix-up in defence saw St Clement concede a penalty of their own and Crick thundered in the spot-kick off the post to make it 4-2.

Rupert Murray rounded the keeper not long after and tucked away what turned out to be the final goal of the game and gave St Clement no way back in a dull final half-hour.

"We had goals in us tonight and we knew if we defended properly then we were going to score a few - it was five and it could've been a lot more I think.

"They were a good side but I think we had the edge and we always looked like we had a threat on the break."