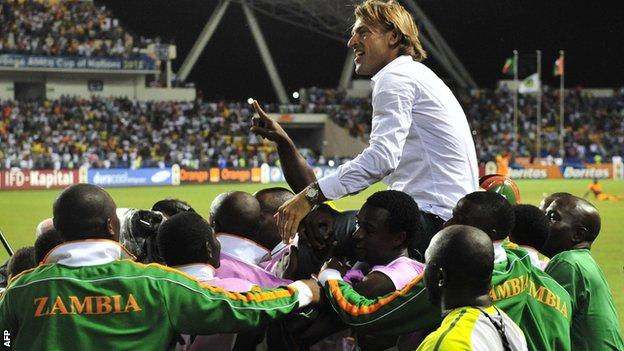 Zambia's squad for the Africa Cup of Nations in South Africa will include 19 of the players that won the 2012 edition in Gabon and Equatorial Guinea.

Veteran defender Chintu Kampamba, who has been without a club since June, was left out of the final 23-man squad.

French coach Herve Renard named his final squad after Zambia drew 0-0 with fellow finalists Morocco in a friendly in Johannesburg on Tuesday.

That result halted a three-match losing streak for Chipolopolo.

"Doing the preparations, we can see the players are not 100 percent yet," Renard said.

"It's my fourth Africa Cup. We'll do our best. We're not Ivory Coast, we're not Ghana.

"Why do you think we come to the Africa Cup? To drop out in the first round?

"There are 13 days till our first game. We are better than three days ago and we will be better in three days."

Morocco coach Rachid Taoussi was happy for the practice against the continental champions.

"For Morocco, playing against the African champions was psychologically very important," he said.

The holders continue their preparations with a game against Norway in Ndola on Saturday and a final friendly against Namibia in Nelspruit next week.

They open the defence of their title with a Group C match against Ethiopia in Nelspruit on 21 January, before facing Nigeria and Burkina Faso.

Norway, with a team of inexperienced home-based players, scored the only goal from captain Tarik Elyounoussi four minutes before half-time.

The result will also leave the home public sceptical about the team's chances at the 16-team tournament, which South Africa kick off against Cape Verde in Johannesburg on 19 January.

"I'm disappointed we lost the game, but we created a lot of good chances. We have to work now on using the possession better and not over-elaborating so much on the ball," South Africa coach Gordon Igesund said.

South Africa conclude their preparations against fellow finalists Algeria in Soweto on Saturday.