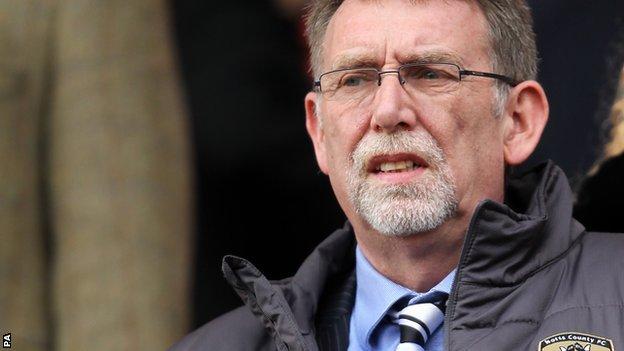 Notts County chairman Ray Trew has said that he is not prepared to invest more money in the club because of falling attendances and a lack of support.

Trew posted on a fans' messageboard to say he also cannot spend more to back their League One promotion push because of salary restrictions.

Trew, who said he has invested £12m since taking over in 2010, added: "I am not prepared to increase that sum.

"And the only way I will inject further monies is in the form of loans."

He added on Notts County Mad: "If I am being totally honest I am not motivated to even do that currently because I am not being supported by you, the fan base."

Whilst I am disillusioned at the moment with the falling attendances (which is now severely impacting on the club's cash-flow), it is not in my character to give up on anything

The Magpies have slipped to six points outside the play-off places, but despite winning just once in eight league matches, they are only six points off the top six and have at least one game in hand on all 12 teams above them.

And Trew has reiterated his commitment to the Magpies, insisting he would not walk away.

He said: "Whilst I am disillusioned at the moment with the falling attendances (which is now severely impacting on the club's cash-flow), it is not in my character to give up on anything, so despite postings and rumours to the contrary, I will state for the record that myself and my wife are here to stay."

Trew added that although the average attendance is not much lower than last season, the figure is "camouflaged" by the number of free tickets given to schoolchildren.

However Trew said because the club have a relatively high wage bill - the sixth highest in the division - players have to leave before signings can be made.

One of the club's biggest wage earners, Lee Hughes, had his contract cancelled by mutual consent this week and that is likely to free up money to bring in new faces.