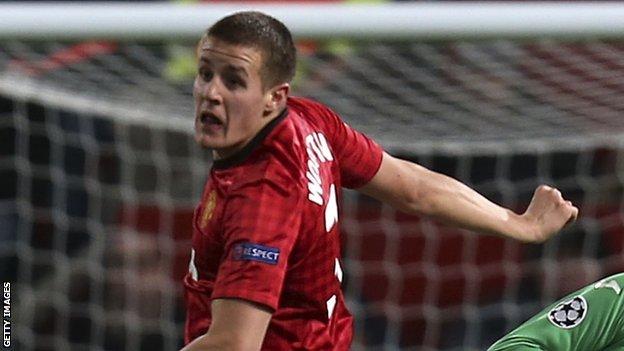 Petrucci, 21, has agreed a one-month stay with the Championship strugglers.

Wootton, also 21, has joined until the end of the season.

He had a previous loan spell at London Road, making 14 appearances for Posh last season, but he cut the stint short when he became frustrated by a lack of first-team football.

The centre-half has made four appearances for United this term, including starts against Chelsea in the League Cup and Cluj in the Champions League group stage.

"I'm delighted to be back," Wootton told BBC Radio Cambridgeshire. "I know most of the staff and the way they like to play football.

"Last time I was disappointed because maybe I could have played a few more games and I would have liked to show the fans what I can do.

"I've got that chance now and hopefully I'll play a lot more games."

Italian Petrucci moved to Old Trafford from Roma in 2008 but his only first-team appearances so far came on a pre-season tour to South Africa.

He has substantial experience of the Red Devils youth and reserve system, but missed most of the 2010-11 campaign through injury.

The pair follow Ryan Tunnicliffe, Ben Amos and James Chester as players who have made the loan move between Sir Alex Ferguson's United and his son Darren's side.