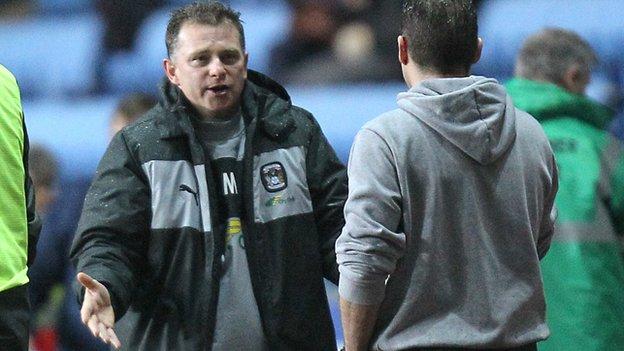 North End came in for criticism from home fans for their robust approach when the two sides shared a 1-1 League One draw at the Ricoh on 22 December.

Robins said: "They do what they do and they do it well.

"If they're on their mettle, they're a match for anybody," he told BBC Sport.

"We've got to match that threat. It's about earning the right to play."

Graham Westley's Preston are three places - and three points - below the Sky Blues in the League One table as the two sides meet up again just 19 days after their last physical encounter.

Should we win this one, we get a two-leg final and then we can start looking forward to the chance of a great day out. But, first and foremost, we have to focus on this one

But home advantage, coupled with Coventry's form over the last two months (one defeat in 14 before successive ew year losses to Shrewsbury Town and Tottenham Hotspur), makes the Sky Blues favourites against a North End side who have won just once in the league in two months.

"It gets to the exciting stage now," Robins told BBC Coventry & Warwickshire. "90 minutes at home at the Ricoh.

"The supporters are going to be in good voice and probably there in number.

"Should we win this one, we get a two-leg final and then we can start looking forward to the chance of a great day out.

"But, first and foremost, we have to focus on this one."

New signing Leon Clarke is expected to make his full home debut, having appeared as a second-half substitute in the 1-0 defeat by Shrewsbury Town on New Year's Day before making his first start in Saturday's 3-0 FA Cup third round defeat at Tottenham.

Meanwhile, the Sky Blues have cancelled the contract of full-back Chris Hussey by mutual consent.

Hussey, who joined Coventry from AFC Wimbledon in October 2009, has started just one game since Robins became manager.