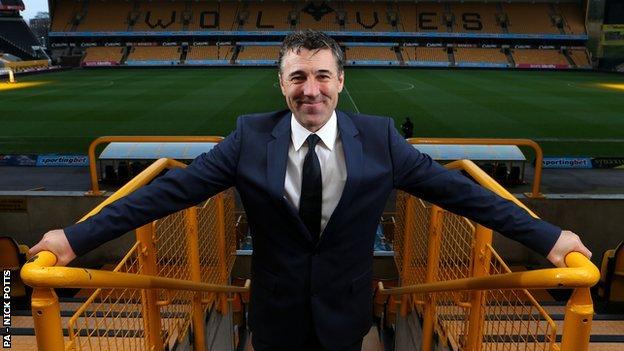 Wolves boss Dean Saunders is targeting the area he knows best as he plans to freshen up his squad at Molineux before the close of the January window.

The former Wales international striker knows that Wolves have been short up front ever since the £14m summer sale of top scorer Steven Fletcher.

And he only has Kevin Doyle and Sylvan Ebanks-Blake at his disposal.

"Any club is only as good as its strikers." Saunders told BBC WM. "If your strikers play well, you win."

Apart from top scorer Ebanks-Blake, who has hit nine Championship goals this term (two of them penalties) and five-goal Doyle, Wolves also have youngster Jake Cassidy back from an 11-goal haul in League One for Tranmere Rovers.

But, with adaptable midfield summer signing Bjorn Sigurdarson his only other option up top, it would be a major surprise if Wolves, currently lying 18th in the Championship, went through the January window without a new striker.

I'm looking to make a few additions in certain areas where I feel we're weak. It's a just a question of whether we're shopping in Lidl's or Marks and Spencer's

"I know we've got the players here," added Saunders. "It's a matter of pointing them in the right direction.

"And I'm looking to make a few additions in certain areas where I feel we're weak.

"It's just a question of whether we're shopping in Lidl's or Marks and Spencer's."

Most of all, though, Saunders is looking for a change of attitude in his dressing room.

Wolves chief executive Jez Moxey has categorically dismissed newspaper reports of unrest in the dressing room having led to the sacking of Saunders' successor Stale Solbakken.

"I don't believe there were rifts in the dressing room," Moxey told BBC WM. "In fact, I'm certain there weren't. Fiction often gets in the way of fact in this business."

But Saunders insists that all he is looking for is the same sense of team spirit and determination that took Wolves from Championship outsiders to the Premier League under Mick McCarthy.

"In the short term, we just need to tighten up a bit and stop the ball going in our net," said Saunders, ahead of his first game in charge - Friday night's Molineux meeting with Blackburn Rovers, where he was number two to his old Liverpool boss Graeme Souness for three years.

"But my main message to the players has been 'Whatever took you to where you've got to, you've got to get back.

"Some people settle for what they've got.

"I've got that streak of determination in me. A sense of pride that makes me a bad loser.

"It's determination that keeps you at the top. If you haven't got that, you're not going to stay there long."