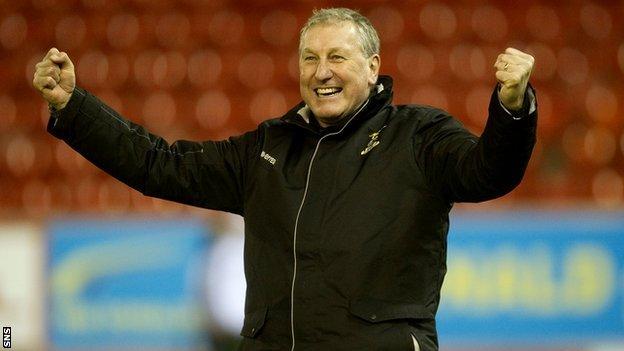 The 54-year-old was given permission to open talks with the Championship strugglers on Monday.

However, the former England captain has elected to stay with the Highland side.

"It was a very tough decision because Barnsley made me feel so welcome. They're extremely passionate for the club but we've started something at Inverness ," he told the BBC.

"We're obviously very disappointed. We put a lot of effort in trying to recruit Terry

"This is the best season of my managerial career - but it's only halfway through and I want to finish the season off in style and continue the good work we've started."

Butcher took over at Inverness in January 2009 and has guided the club to second in the Scottish Premier League and they face Hearts in the League Cup semi-final this month.

And the former England centre-half said that loyalty to the players and staff he has brought to Inverness meant he had to stay.

"It's one of the hardest decisions I've ever had to make," added Butcher.

"Under any other circumstances, I would have jumped at the chance. But for me it's something special that we've got here and I never really wanted to leave.

"It's a good job for someone and perhaps in the future that could be me. "

Inverness chairman Kenny Cameron also said he was relieved at Butcher's decision to remain with the club.

"When Barnsley made their approach we felt that out of courtesy we should allow Terry the opportunity to meet with them," he said.

"But it is a huge relief that he has opted to stay."

The Tykes, who are bottom of the Championship, have been without a manager since sacking Keith Hill on 29 December.

"I was sure we convinced him that Barnsley was the right club for him.

"It's not finances that have determined his decision. I think it's purely the fact that he's taken stock of where he is with Inverness."