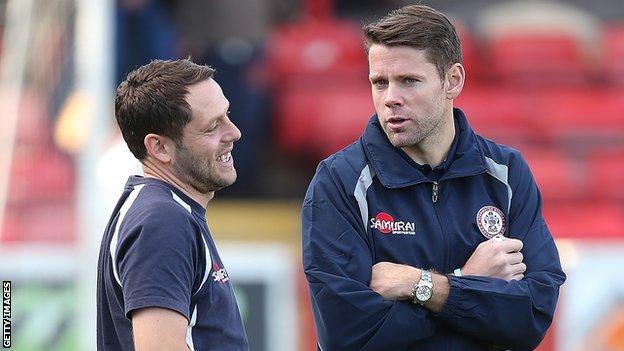 James Beattie has agreed a deal to remain as player-coach at Accrington Stanley until the end of the season.

The 34-year-old former England striker in November and has scored four in 10 games for Stanley.

Stanley boss Leam Richardson and Beattie were at Blackburn Rovers together as youngsters in the 1990s.

"It's fantastic to have a player like James Beattie with the quality he has one the pitch and the influence he has," said Richardson.

"It can only be a good thing that he's staying and hopefully it can help."

Beattie had been without a club since being released by Sheffield United at the end of the 2011-12 season and he admitted that he had even offering to turn out for teams on a "pay as you play" basis.

Richardson was replacing Paul Cook and the Lancashire side are now 18th in League Two.

"I think people have seen the quality that he's still got in front of goal and the work ethic and appetite he's still got for the game," he told the club website.

"He's a great influence in the dressing room and with the younger lads he's second to none.

"He's had a large amount of offers to play in League Two and League One and even abroad but in his words he wants to come and help and be part of something exciting."