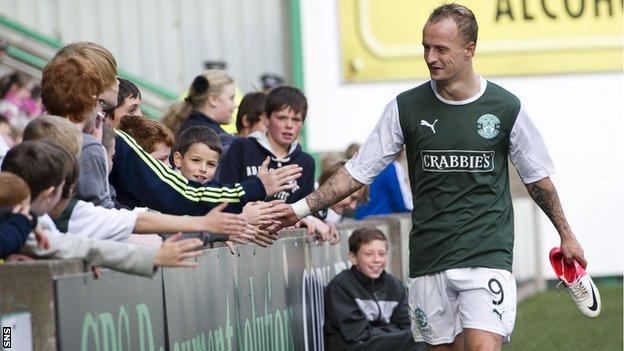 Wolves' new manager Dean Saunders will run the rule over Leigh Griffiths before he decides whether to keep him.

Griffiths trained at Molineux on Tuesday and Wednesday, with his loan deal at Hibernian set to end shortly.

The striker is Scottish football's joint top scorer at the halfway point of the season, scoring 14 goals in all competitions for Hibs.

"Let me have a look at the group for two or three days and get a better idea of where we are," said Saunders.

"If I need to sign an expensive striker and he's not going to play, then I would rather him go out and play games and learn. But, if he's got a chance to play. I'll keep him here."

Whatever his decision, Saunders insisted Griffiths would be the first to hear.

Griffiths joined Hibs in August 2011, after he had signed for Wolves from Dundee, with the loan extended to the end of that season.

The 22-year-old returned to Easter Road in July 2012 and won his first Scotland cap in November's friendly in Luxembourg.