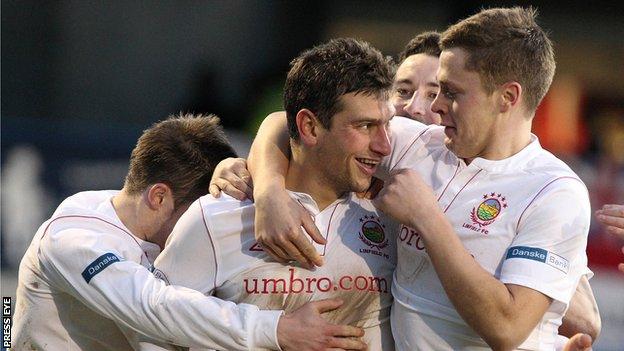 There has been a merry-go-round of transfers involving some of local football's top strikers in the January window - but so far the top four clubs have not been tempted to enhance their attacking credentials.

Leaders Cliftonville are sticking with the lethal combination of Liam Boyce and Joe Gormley - and why not? The pair have already delivered 40-odd goals between them, suitably complementing the league's meanest defence.

But now that Linfield have a fully fit Matthew Tipton on board, there is extra intrigue to the race for Gibson Cup glory.

The Blues missed his menace over the past few months and, as if to highlight the fact, the Welsh ace, who scored 22 times for Portadown last season, has celebrated his return in style.

Six goals in three starts, including a hat-trick against Coleraine, indicate that he could still finish the season as top striker at Windsor Park.

Portadown will hope to advance into a top six slot with impressive Scottish striker Gary Twigg in their ranks.

A debut goal against Donegal Celtic has the former Shamrock Rovers man off the mark and threatening to inflict even more damage when he achieves full fitness after a lengthy break since the end of the League of Ireland season in October.

Ballymena United's new additions, Shane Dolan and Gary Liggett, might well make a significant difference to the fortunes of the Braid men, who to date have conceded more goals at home than they have managed to score.

Liggett, scorer of 22 goals for Lisburn Distillery last season and 17 over the previous campaign, has already a dozen strikes to his name for the struggling Whites.

Coleraine, whose form has dipped since mid October with five 1-1 draws and four defeats in 13 outings, have added former Linfield and Portadown winger Jamie Tomelty and still hope to secure Mark Miskimmin from Donegal Celtic.

Manager Oran Kearney still views his Showgrounds mission as a work in progress but will expect to see an improvement to ensure a place at the top table when the league splits at the end of March.

The title remains Cliftonville's to lose. We all wondered how Tommy Breslin's team would respond to their 3-1 reverse at the hands of the champions on New Year's Day.

Next up were Glentoran, showing improvement in recent weeks with only one defeat in their previous six games going into the Solitude challenge but Cliftonville displayed their pedigree, storming back from a goal down to win 4-1.

Breslin felt the scoreline flattered his team but the point is simply that they can deliver goals aplenty. There is a cutting edge that so far nobody else has been able to match.

That is the challenge for the title holders. David Jeffrey has refused to be swayed by talk of Linfield jitters over the opening weeks.

The Blues did lose five times in their opening 12 games but have responded by easing through the gears to suffer only one defeat in the succeeding 13.

Crusaders have gone about their business with little fuss. Stephen Baxter's charges have virtually matched Cliftonville blow for blow although their pride took a dent when they lost the north Belfast derby 1-0 at Solitude on Boxing Day.

If you are looking for consistency, statistics don't lie. Indeed, they indicate that the Shore Road side have tasted defeat merely twice in 16 Premiership fixtures since the start of October.

So, can Linfield, the most successful team in local football, deny Cliftonville a fourth title? Will All-Ireland champions Crusaders have the final say and land a fifth success? Are the Glens and Coleraine too far off the pace already?

It's certainly shaping up to be fascinating final few months of the season.