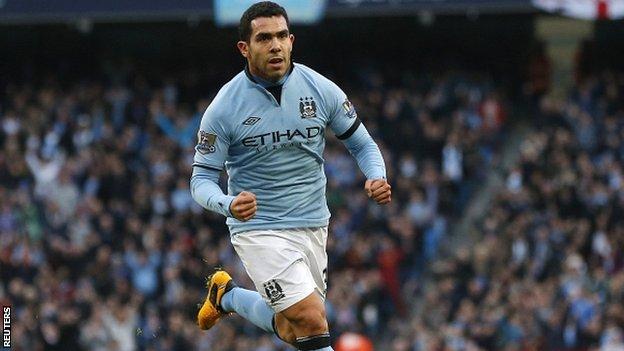 Mancini recently expressed his regret City could not sign Van Persie, who has scored 20 goals this term, and said he was the difference between the teams.

"Those words were a motivation for the strikers," said Tevez, who has scored eight times for City this season.

"I'll try to help us to compete in the League and Cup, and try to win both."

The teams meet again at Old Trafford on 6 April and Tevez said: "There's a long way to go and a lot of games to play. The emotion of the Premier League means it's always a fight to the end.

"If United lose one game, we'll be getting close to them. They will know that."

United saw an eight-point advantage evaporate last term as City won the title on goal difference and Tevez added: "We know that we need to carry on fighting. United lost some games last season and we were back on track, so we will keep doing our job."