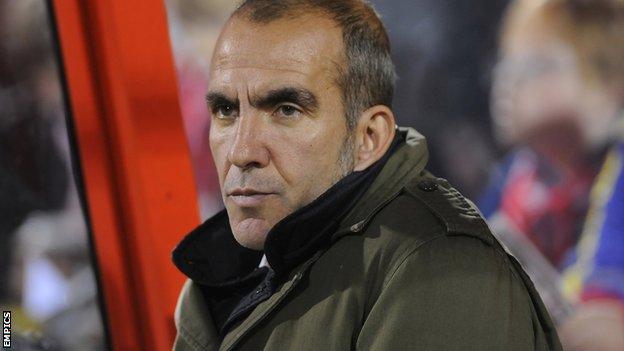 Swindon boss Paolo Di Canio would like to sign 'seven or eight' players from Bournemouth if he had the chance.

Town travel to face the Cherries on Saturday, having beaten them 4-0 at home in September when Paul Groves was in charge at the Dorset club.

Despite their comfortable win at the County Ground, Di Canio was impressed by the Bournemouth squad.

"After the game I said 'they have seven or eight players that I would have here'," the Italian told BBC Wiltshire.

At the time, Bournemouth had picked up just eight points from eight games and were 17th in League One, 12 places below Swindon.

But since Eddie Howe's return to the Goldsands Stadium in October, they have surged up the table and now sit seventh, just three points behind last year's League Two champions.

"Seven or eight could play over this level and they've proved this since they changed their manager," continued Di Canio.

"I would pick any of them, not because my players are not good, but because they could integrate with the team."

Meanwhile, BBC Wiltshire has learned Swindon have turned down an offer from Bradford for defender Aden Flint.

The 23-year-old former Alfreton player is out of contract in the summer and has made just one appearance since returning from a four-game suspension in December - imposed for his sending off against Macclesfield in the FA Cup.