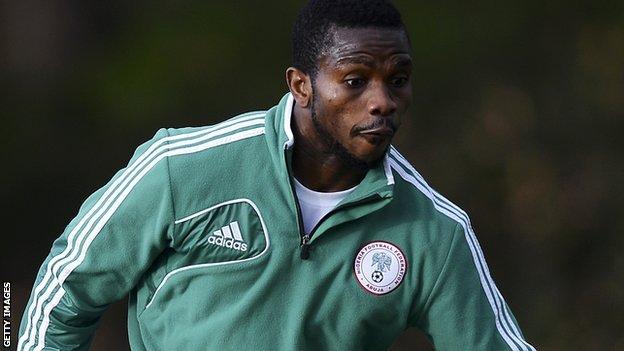 Nigeria have included six locally-based players in their final 23-man squad for the Africa Cup of Nations in South Africa - the greatest number in more than two decades.

"They've earned it and I look at this as an opportunity for the local players to prove themselves," Super Eagles coach Stephen Keshi told BBC Sport.

"I have belief in the players selected.

"They have been given a task to do and I'm strongly convinced they will not disappoint me."

United States-based striker Bright Dike and midfielder Raheem Lawal, who plays in Turkey, have both been dropped.

But captain Joseph Yobo (pictured) will play in his sixth finals after making the squad on the deadline day for submitting players for the tournament which kicks off on 19 January.

Two-time winners Nigeria were held to a 0-0 draw by tournament debutants Cape Verde on Wednesday in Portugal as both sides continued their preparations.

And Keshi admitted he was left with plenty to ponder after the performance.

"Friendlies are meant to expose areas we need to work on. The second half was slightly better and lessons are learned," Keshi said.

"There were some bright moments but we still have time to quickly rectify our obvious weaknesses."

The Super Eagles will play their last warm-up against FC Rotterdam in Faro on 16 January before they depart for the tournament.

Nigeria have a point to prove in South Africa having missed the 2012 finals in Equatorial Guinea and Gabon.

Under coach Keshi, who took over in October 2011 following the sacking of Samson Siasia, Nigeria were unbeaten in 2012.