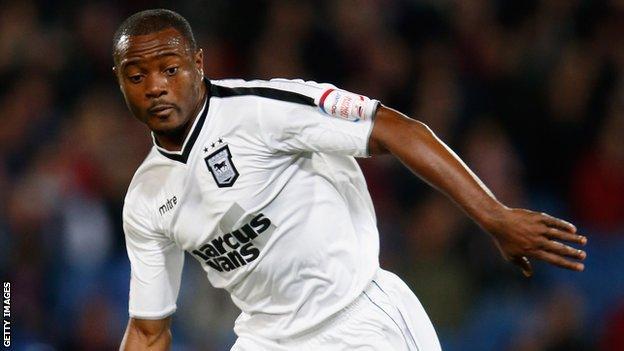 Ipswich Town boss Mick McCarthy would like to keep goalkeeper Stephen Henderson and midfielder Nigel Reo-Coker at the club until the summer.

Henderson's loan spell from West Ham expires this month, although the 24-year-old is currently sidelined by an ankle injury.

And Reo-Coker's short-term deal comes to an end on Saturday.

"I'd like to keep it the same and keep Nigel until the end of the season," McCarthy told BBC Radio Suffolk.

"We're waiting to see what Nigel and his agent want to do."

The former West ham and Aston Villa midfielder, 28, has made the starting line-up in Town's last two games after going seven matches without a start.

Henderson, meanwhile, had made 16 consecutive appearances until Saturday's FA Cup loss to Aston Villa, when Scott Loach took over between the sticks.

A return to Portman Road for Henderson will depend on his fitness and whether Hammers boss Sam Allardyce insists on the deal containing a 24-hour recall clause.

"He could be out for a couple of weeks with his ankle," said McCarthy.

"The 24-hour recall leaves me a little bit exposed, but I'll talk to Sam about that. Hendo wants to come back and I want him back."

McCarthy also confirmed that Blackburn full-back Bradley Orr is likely to extend his loan until the end of the season.

But striker Jason Scotland will be given the opportunity to find a new club after failing to feature since McCarthy's arrival in November.

"He's likely to be going somewhere. He's been fabulous has Jason. He's such a lovely character and has been great around the place," the Ipswich manager added.

"We're going younger and hungrier and unfortunately Jason's missing out. But he understands and he wants to go and play football."

and winger Josh Carson is also being lined up for a loan move away from Portman Road.