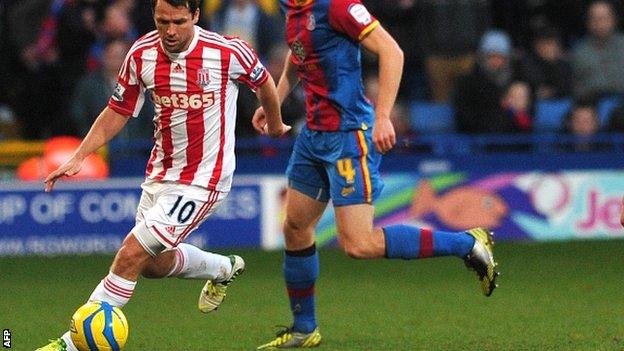 Stoke manager Tony Pulis hopes former England striker Michael Owen will stay at the club for the rest of the season.

Owen has made only five appearances this term, four of which have been as a substitute, and the 33-year-old has been linked with a move to Australia.

"Michael has got a contract until the end of the season and as far as I'm concerned, he has not come in and said he wants to change it," Pulis said.

"So Michael will be part of the club hopefully until the end of the season."

Owen, who spent eight years with Liverpool and also played for Real Madrid and Newcastle, joined Stoke on a one-year contract in September having been released by Manchester United in May after three years at Old Trafford.

There were rumours of a move this month to Australian outfit Perth Glory, with their coach Ian Ferguson revealing "an agent" had contacted them to see if they were interested in the striker.

Perth coach Ferguson ruled out a move for Owen but added that the matter was "discussed at a good level".

Meanwhile, Pulis admitted there had been interest in another Stoke striker, Kenwyne Jones, who is thought to be wanted by Swansea.

"There is Kenwyne, there has been interest from other clubs in other players," Pulis said.

"We always take everything into consideration at this football club, and if it right for the players and the football club, we will do business. If not, then we'll get on with things."