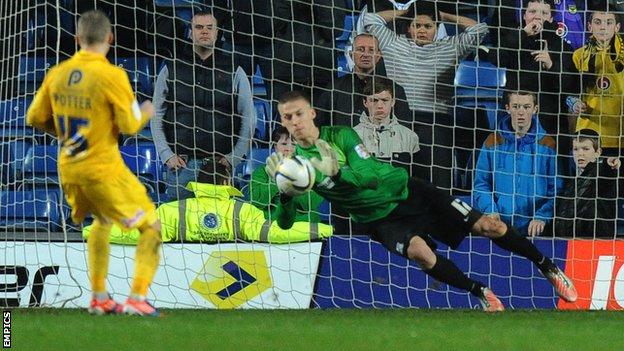 Southend United keeper Paul Smith has apologised for his reaction to being taken off in their Johnstone's Paint Trophy south semi-final win at Oxford.

The 33-year-old showed his anger when replaced by Dan Bentley moments before Tuesday's game went to penalties.

Paul Smith has made 255 appearances in the Football League for Brentford, Southampton, Nottingham Forest, Middlesbrough and Southend

"I made it plain I was a wee bit upset with his antics coming off the pitch and very upset with him not shaking Bentley's hand," said Sturrock.

Smith has been Sturrock's first-choice goalkeeper this season, but the Scottish manager decided he wanted Bentley to face the penalty kicks.

And the 19-year-old made a save as the Shrimpers won the shoot-out 5-3 to progress to an area final against Leyton Orient.

Meanwhile, Sturrock said the injury which has sidelined 12-goal striker Britt Assombalonga since New year's Day has been diagnosed as a bruised leg bone and as a result, he is now looking to bring in re-enforcements.

"I'm in negotiations with a player and a club at this minute in time.

"Whether it comes to fruition or not we'll know in the next couple of days. I don't think it will happen before Saturday."