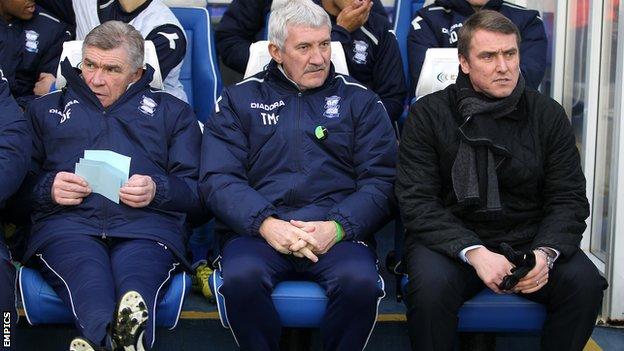 Lee Clark insists there will be no ill feeling when he makes his first return to Huddersfield Town this Saturday with Birmingham City, 11 months on from his Terriers sacking.

Huddersfield are just three places and three points better off than Blues in the Championship table.

And Clark says all he cares about at the John Smith's Stadium is victory.

"It's a massive three points. But it's just as big a game as any we've had this season," Clark told BBC WM.

"There'll be a lot said as it's my old club," added Clark, who will be accompanied by Derek Fazackerley and Terry McDermott, who made up part of his backroom team at Huddersfield.

"But I'm determined to win the football match as we need to start winning games.

"And I'm looking forward to the game as I'll be seeing some old friends and because I've been massively encouraged by our performances, especially of our younger players, over the festive period. And I thought we were exceptional at Leeds."

Blues, lying 20th in the Championship, have won only once in seven matches, including last Saturday's 1-1 draw at Leeds in the third round of the FA Cup.

But Clark insists that they are playing well. And, encouraged by new Wolves boss Dean Saunders' optimism following his appointment this week at Molineux, the Blues boss insists that the 11-point deficit to the Championship play-off zone can still be bridged.

"I listened to Dean Saunders earlier in the week saying that three wins on the trot can change things, and they're only two points ahead of us," Clark continued.

I just go about my job. I don't get involved in that, as it gives me more problems than I really need

"If they're saying that, then it's wide open for anyone. We've all got our targets, but we've also got to be realistic.

"It's a case of turning our performances into wins.

"We haven't had the rub of the green but, if we continue to do that, then I'm sure we'll start winning games."

It has not helped Clark's cause that since taking charge of playing matters at St Andrew's the up-for-sale club's financial future has remained so uncertain, yet he remains nonplussed about continued takeover speculation in the local and national media.

"That's being dealt with by the experts on the board and back in Hong Kong," he insisted.

"I just go about my job. I don't get involved in that, as it gives me more problems than I really need.

"I'm more concerned with getting results on the pitch."

Clark, who had Nikola Zigic sent off in the 1-0 home defeat by Huddersfield back in October, can call on the Serbian giant again this Saturday after two matches out following his second red card of the season in the defeat at Bolton over Christmas.