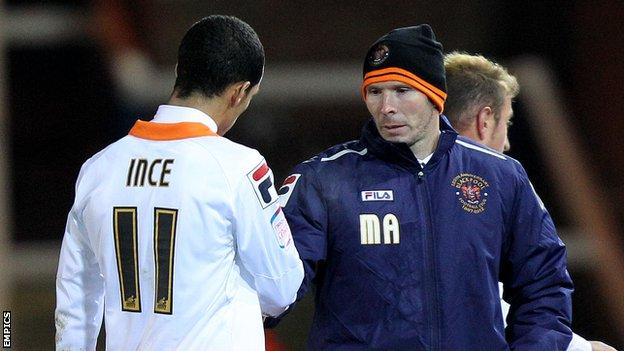 Winger Thomas Ince confirmed that Michael Appleton did not take training on Thursday after an approach from Blackburn for the Blackpool boss.

Meanwhile, Blackburn caretaker boss Gary Bowyer said he expected to be in charge of Rovers at Wolves on Friday.

News of was made public late on Wednesday evening, with managing director Derek Shaw saying he was the only candidate the Championship club had approached.

Since the former Portsmouth boss Blackpool have won two, lost two and drawn eight of their 12 matches in all competitions.

After revealing Appleton did not work with the team on Thursday morning, Ince said: "It's been like any normal day. We can't worry about things that are out of the players' control.

"As players, we stick together. There's a great bunch of lads in there and all we're doing is looking forward to Saturday [when Blackpool play Charlton].

And Ince, who has been the added that the uncertainty surrounding the managerial position will not have any bearing on his own future.

"My future right now is here," said the 20-year-old, who began his career at Anfield. "I'm a Blackpool player, I'm contracted to Blackpool and I'll continue to give 100% for this team."

Blackburn have won all three matches under Bowyer, since after just 57 days in charge.

Bowyer said: "We were told that but like I stressed when that announcement was made, anything can happen in that month.

"The club have made an official approach. Myself and Terry [McPhillips] will continue to prepare the team. If there's anything different, we'll be told about it, I'm sure.

"As we stand, we expect to be taking the team at Wolves."