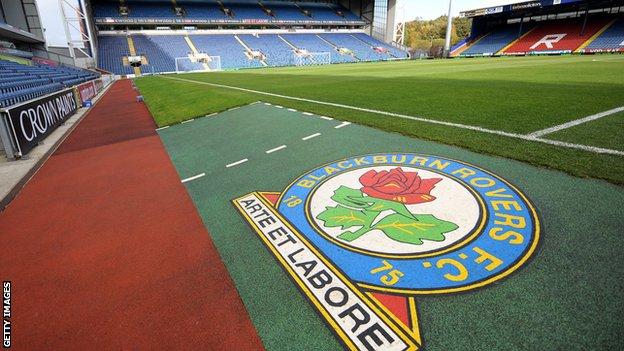 Blackburn fans have long been resigned to the chaos that has engulfed Ewood Park.

"It's gone way past being funny, the club has gone beyond being a laughing stock," says Simon Garner, Blackburn's all-time leading scorer.

"The problems are at the top of the club, they just don't know how to run a football club. I fear for the future the longer it goes on, I really do. It is hard to see the light at the end of the tunnel."

The approach for Blackpool manager Michael Appleton on Wednesday was, according to those close to the club, another example of a club lacking cohesion, clarity of thought and unity. Nothing is what it seems, confusion reigns and the divisions in the boardroom continue to undermine any hopes of finding success on the field.

Bowyer was not contacted by the club to inform him of the development and found out just minutes before the news went public. Having led the club to three successive victories for the first time since September 2008 and restored harmony to a dressing room previously riven by cliques, Bowyer might have been surprised.

"I do feel for Gary Bowyer," Garner added. "He was given a guarantee and then for the club to be approaching another a manager a few days later is incredible. But it doesn't matter who you bring in, [owners] Venky's are in India and don't have a clue what they are doing day-to-day."

Blackburn's global advisor Shebby Singh knew nothing of the approach for Appleton. The man Venky's tasked with running the club on their behalf was left out of the loop on the issue, leaving his future role unclear. Three key board members are split into two clear factions with operations director Paul Agnew and managing director Derek Shaw on one side, and Singh on the other.

Hardly a word has been exchanged between Agnew and Shaw and the club's global advisor since the turn of the year. On New Year's Eve, one faction watched the victory over Nottingham Forest from the directors' box, while Singh opted to watch the match from a private box.

None of the three men wanted to comment when approached by the BBC.

There has been tension between the parties for some time, dating back to Singh's arrival and the subsequent dismissal of manager Steve Kean. On 28 December, Shaw and Agnew flew to India to hold talks with Venky's in Pune. Both men voiced their concerns about a range of issues, including the role of Singh, and pushed to see an experienced manager appointed after Henning Berg's failure.

A club source claimed Agnew and Shaw had in fact been summoned to India by the owners and that their own positions could even be in doubt. Not for the first time, confusion reigned.

The divisions in the Ewood boardroom were also a key factor in the prolonged search to replace Kean. Shaw and Agnew met with Blackpool manager Ian Holloway, while Singh pursued Tim Sherwood.

When Berg was presented as manager, Shaw was quick to insist the appointment had been Singh's and Singh's alone. History will show, it was to prove a damaging and expensive mistake for Rovers. But with the club winning matches and the players happy with the leadership of Bowyer, the ripples are back.

On Thursday, Blackburn Rovers Action Group released a statement. "Internal power struggles have become far more important [than what happens on the field]," it read.

"While one man has tried to pull the club off the floor others in the board room have turned the club into a national laughing stock by undermining him… personality clashes are being prioritised over the best interests of the football club, it appears contradictory messages and statements add to the pantomime."

What Blackburn fans will find hardest to fathom is why the club is back in the news for the wrong reasons, just as matters on the field have, for the first time this season, settled down.

The players have enjoyed life under Bowyer and a number of them are understood to have expressed their anger at the way the caretaker manager has been treated when informed of the club's latest manoeuvrings on Thursday. The misinformation and confused statements, committing to Bowyer one day before approaching another manager six days later, have left staff, players and fans bewildered.

"As a player you just try to keep your head down and ignore what is happening off the field but it isn't easy with the club making the wrong sort of headlines time and time again," Garner said. "Is Michael Appleton the right man for the job? I don't know. But I have been on the internet today and I see he has a worse win percentage than Steve Kean and he is not the experienced name the fans want so he is on a hiding to nothing from the start."

There are suggestions the power struggle is coming to an end. Now the hope from the supporters is a return to harmony on and off the field, whoever is left standing at the end of the battle. Venky's have risked much to bankroll a push for an immediate return to the Premier League. Kean was allowed to invest more than £15m in transfer fees during the summer, paying a club record fee for Jordan Rhodes.

Failure to get back to the top flight at the first time of asking would increase the financial pressure on the club. Another battle looms and it is one Blackburn could do without. The club badge may hold the answer, at the base of it lie the words 'arte et labore' - by skill and by labour.