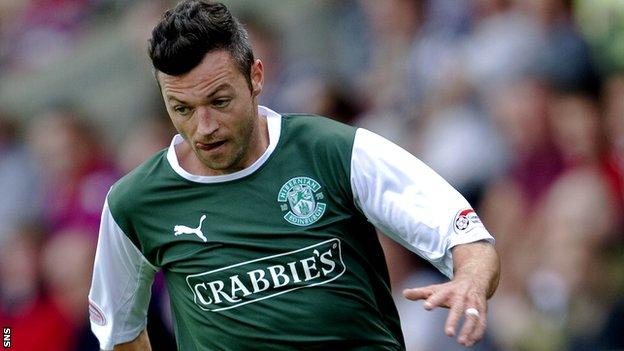 The 31-year-old Northern Ireland international has signed an 18-month contract with the Dingwall outfit.

"He's not had the starts he wanted this season at Hibernian and he'll be a good signing for us," manager Derek Adams told BBC Scotland.

"He's a quick player and we've lacked a bit of pace over the last couple of seasons."

Sproule, who moved to Easter Road as an amateur from Northern Irish club Institute in 2005, joined Bristol City for £500,000 two years later.

But he returned to Hibs in 2011 for a second spell in the Scottish capital.

County manager Derek Adams has also confirmed he is looking to add another two players to his squad.

"We have agreed terms but until the paperwork is finalised we cannot reveal the names," he said.

"We're working on a foreign deal for a player from Greece and we're just waiting on international clearance," he said.

"And we're waiting on a work permit for another player in another country as well.

"We're ahead of schedule so far and we're looking to add to the squad in the coming weeks."