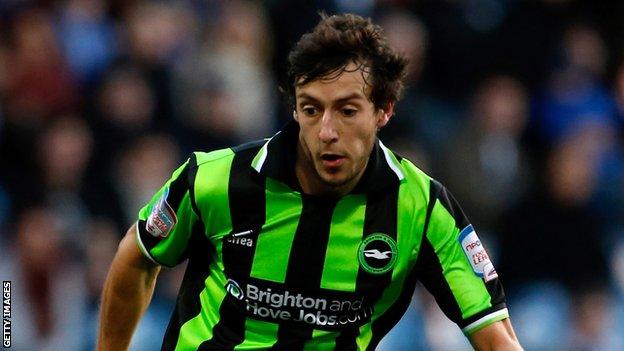 Brighton & Hove Albion winger Will Buckley says the belief he can reach the Premier League with the club convinced him to sign a new contract.

Last week the 23-year-old committed to the Seagulls until the summer of 2017.

He told BBC Sussex: "When I first signed I knew where the club was going. Eighteen months later it is still going in the right direction.

"We are even more committed to going up to the Premier League now with the things they are doing at the club."

He added: "I was very happy to sign the contract and am still buzzing about it.

"The gaffer [Gus Poyet] mentioned it, the club approached me and within two or three weeks it was sorted out."

The former Rochdale wide man joined Brighton from Watford in summer 2011 for a fee of £1 million.

Buckley has scored 13 goals in 55 appearances for the East Sussex club and he feels his game has progressed significantly since moving to the Amex Stadium.

"I hope I have improved since I got here," he continued.

"I think I have. Physically I have improved as age goes along.

"As a player on the pitch and making decisions, the gaffer talks about it and has said I am a different player.

"I have improved massively in different areas I needed to.

"I hope I carry on improving at the club. That is the main thing."