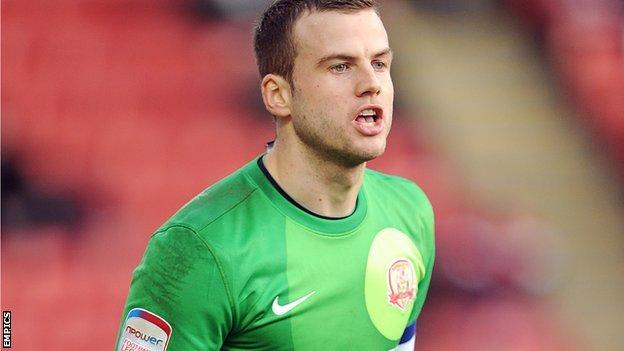 The Tykes have been unsuccessful in their approaches for Sean O'Driscoll and Terry Butcher this week.

Steele, 28, told BBC Radio Sheffield: "Obviously Terry has turned it down and at the moment David is in charge.

"I think all of the players are happy with that and they would love to see him given the job."

He continued: "He's a really good coach, gets on with everybody and in the two games we've had under him we've done well."

Flitcroft was put in charge on a temporary basis after Keith Hill's sacking on 29 December and brought in Micky Mellon and Martin Scott to assist him.

After defeat by Peterborough in his first game in charge, Flitcroft guided the Tykes to just their second win in 16 matches when they beat Burnley 1-0 in the FA Cup on Saturday.

Meanwhile, the captain admits that the public nature of the club's search for a new manager has been "frustrating".

Former Forest boss O'Driscoll turned the job down on Sunday and Inverness manager Butcher opted against leaving his current post on Wednesday after two days of talks.

"It's frustrating because the club have said who they're going for and then he says no and they're back to square one," he continued.

"Whoever comes in we will give 100% and I'm sure the board will make the right decision eventually."

The Tykes, who are currently bottom of the Championship, face Leeds in a Yorkshire derby on Saturday.