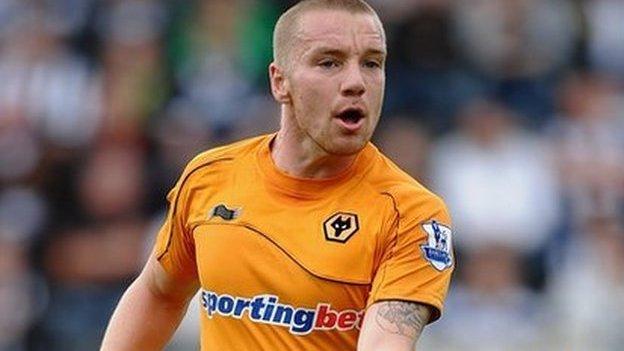 Jamie O'Hara says new Wolves boss Dean Saunders will motivate the players to get the results the club needs to drag them out of trouble.

"He's a real motivator," O'Hara told BBC Midlands Today. "He's going to get the best out of the players.

Saunders has only been in charge since coming in on Monday morning as the sacked Stale Solbakken's successor.

We've not been good enough this season, whether it's the hangover from being relegated or the change of philosophy

But O'Hara insists: "He's already changed the philosophy and mentality. He's the motivator the team needs."

The former Tottenham Hotspur midfielder even makes a comparison between the loquacious Saunders and former manager Mick McCarthy, the man whose he sacking in February triggered the rollercoaster ride that has seen Wolves employ four managers in jut 11 months.

"We needed a different way. And I think it's going to benefit us. I hope we can go out and get results for him."

"I've had a few setbacks," admitted the 26-year-old Londoner, who first joined Wolves, initially on loan, from Tottenham Hotspur two years ago.

"It was disappointing as I was playing really well at the time. It broke my heart really.

"When I joined we were on the up, being very ambitious, looking at being a top 10 side.

"Instead we've gone the other way and it's been a bit of a nightmare. Not great to be a part of to be honest.

"But now I'm back to full strength and we're looking to put a few results together now to get the fans back on our side and start heading back up the table, starting against Blackburn on Friday night.

"We've not been good enough this season, whether it's the hangover from being relegated or the change of philosophy.

"Stale was a great manager but it takes time to drill that into teams."