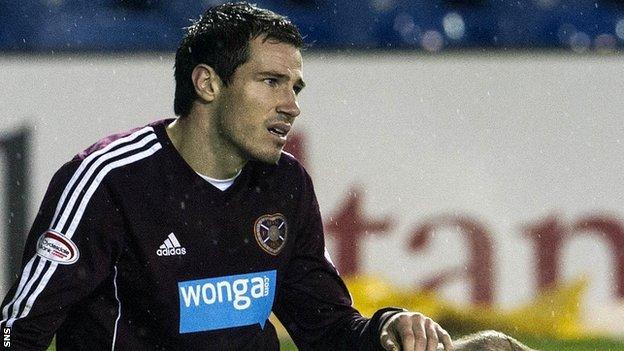 And McGowan claimed he knew his chances at Tynecastle would have been limited had he not departed from the club in the winter transfer window.

"I understood if I didn't sign for anyone in January, the chances of me playing between now and the end of the season would have been slim," he said.

However, the Australian is convinced that he could return to Scotland at a later stage of his career.

It's an up-and-coming league, a very wealthy league. I think this will be very good on my CV

Despite a move to China being relatively uncommon for Scottish players, McGowan is looking forward to moving to a league he describes as ambitious.

"It's an up-and-coming league, a very wealthy league," he said.

"The whole aim of the league and the clubs is to be exactly like Europe, so, in that way, it's exciting to be part of that.

"I think this will be very good on my CV."

But McGowan was quick to pay tribute to Hearts, who he said had looked after: "a lanky kid form Australia."

"It's been a wonderful journey," he added. "I've loved every single minute of being involved."

McGowan also revealed he had come close to signing for Rangers at the same time as his erstwhile Hearts teammate David Templeton moved to the Ibrox club.

"I was pretty close, I think," he said. "The club called both of us and said they'd accepted a bid.

"At the end of the day, I made the decision to stay at Hearts."

And the Australian said he had a lot of sympathy for Templeton, who received criticism for moving to the Third Division side.

"It's a strange situation, and I think Temps got a lot of unfair criticism.

"You know, if the club don't want to sell him, then don't accept the bid."