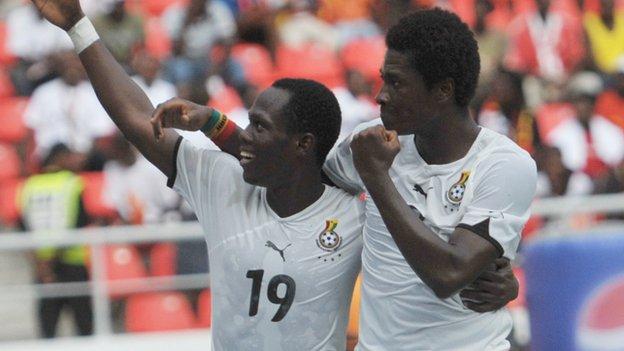 Ghana warmed up for next week's Africa Cup of Nations by beating seven-time continental champions Egypt 3-0 in a friendly in Abu Dhabi.

Emmanuel Agyemang-Badu opened the scoring for the Black Stars in the first half, before Richard Boakye and Asamoah Gyan added goals after the break.

There were some concerns for Ghana coach Kwesi Appiah though, after midfielder Anthony Annan was forced off with an injury in the first half.

Ghana, the second favourites for the Nations Cup behind Ivory Coast, open their Group B campaign against DR Congo on 20 January as the 2012 semi-finalists seek their first Nations Cup win since 1982.

The Black Stars - who were playing an Egypt side who have lacked competitive football since the suspension of their league last February - will also face Mali and Niger in host nation South Africa.

Earlier in the day, Gabon and Nations Cup-bound Tunisia drew 1-1 in another friendly played in Abu Dhabi.

The Carthage Eagles, who won the competition on home soil in 2004, took the lead after just 15 minutes through Saber Khlifa.

Six minutes after the break, the Gabonese - who co-hosted last year's Nations Cup (along with Equatorial Guinea) - levelled the scores as Johan Lengoualama profited from some slack defending.

It was an unconvincing performance from Tunisia who have been drawn in Group D alongside Algeria, Togo and Ivory Coast.

Meanwhile, Gabon's Panthers - who could have led through Martin Essono shortly after their goal - will miss out on the tournament after losing out to the Togolese in qualifying.

Tunisia will next face Ghana in Abu Dhabi on Sunday before flying off to South Africa for the 2013 Nations Cup.