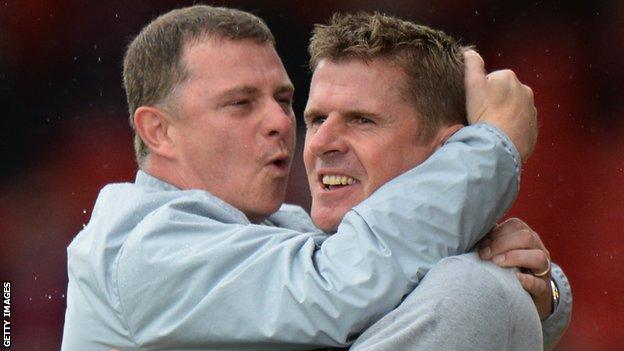 Preston North End looked set to go through at the Ricoh Arena when they led 2-1 three minutes into injury-time.

But goals from Carl Baker and Leon Clarke turned the game on its head.

"This is what the game's all about, the sort of night that gives you heart attacks.

What does not kill you makes you stronger

"We thought we were going out," he told BBC Coventry & Warwickshire. "But the reaction from the crowd when the fourth official held up the sign saying there was five minutes of injury time gave us that bit of energy we'd lacked all night.

The 12,655 who turned up to witness the last-gasp triumph made this the Ricoh's second biggest gate of the season, beaten only by the 15,185 for the New Year's Day home defeat by Shrewsbury Town.

And there are sure to be even more when Coventry play the winners of next Tuesday night's Crewe-Bradford northern semi-final (15 January, 19:45 GMT) for a place in the Wembley final on 7 April.

After Gary McSheffrey had cut inside to fire just wide and Clarke had gone even closer on his full home debut, pulling a good chance just wide, the home side broke the deadlock four minutes before the break.

William Edjenguele knocked down Baker's free-kick for Steven Jennings to steal in at the far post and clip home his second of the season.

But Coventry were left cursing those earlier missed chances when Preston pulled level on 68 minutes, Luke Foster's header ricocheting in at the near post from John Welsh's right-wing corner.

Baker's free-kick then clipped the top of the bar before Preston got a lucky break at the other end to take the lead with 10 minutes left.

But Coventry were not finished, stunning North End with two strikes at the death, after North End had been handicapped by a knee injury to Steve Simonsen, who was forced to stay on as the visitors had made all their substitutions.

First Baker blasted home through Simonsen's legs before Clarke was first to the rebound when the Preston keeper clumsily parried Baker's shot.

"What does not kill you makes you stronger," admitted a shell-shocked Preston boss Graham Westley after his side's second knockout trophy exit in five days, following Saturday's FA Cup defeat at Millwall.

"We can't afford after this to go away feeling sorry for ourselves.

"Instead, we have to harness the pain we are feeling at the moment and use it to our advantage going forward."